The Making of my 2018 Spring Carnival Outfits: Part 2 of 3 – Melbourne Cup Skip to content
Previous Next

The Making of my 2018 Spring Carnival Outfits: Part 2 of 3 – Melbourne Cup

This is Part 2 of a 3-part blog series where I show you how I made my three 2018 Spring Carnival outfits pictured below.

In this post I’ll share how I created my Melbourne Cup Day outfit. If you missed the previous post about the making of my Derby Day outfit, you can find that one here.

My Melbourne Cup outfit was the result of many lucky encounters and ideas as you’ll see in the following sections. 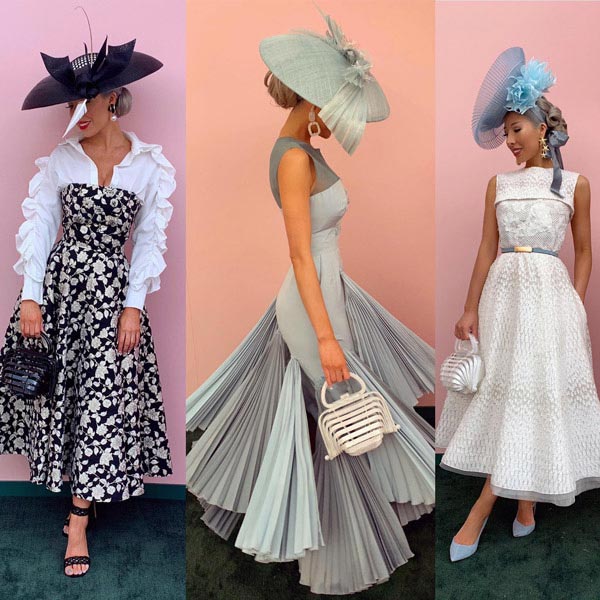 Starting with the Hat

Upon accepting a judging position at Cairns Cup, Ana Bella Millinery contacted me, offering to make me a hat to wear. Although she lives in London, Cairns is her hometown and she wanted her piece to be present.

We began discussing colours and Ana suggested blue. I too had been thinking about the colour blue in an outfit for quite a while so we agreed upon a dusty blue. She created a hat with a rose like base, from leather and pleated crinoline swirls and it arrived in early May. It was beautiful. 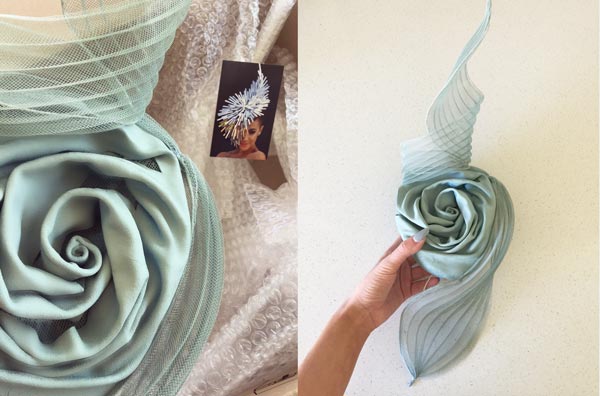 In Search of a Blue Dress

I popped over to Andrew’s house one afternoon with my Ana Bella hat in tow to have a chat with him about a blue dress I wanted him to make me for Cairns Cup to match my hat.

When I arrived, laying on his table were some pleats he had been testing and experimenting with. He had made his own pleat template from cardboard and baked them in the oven! Yes, his oven at home! So incredible! 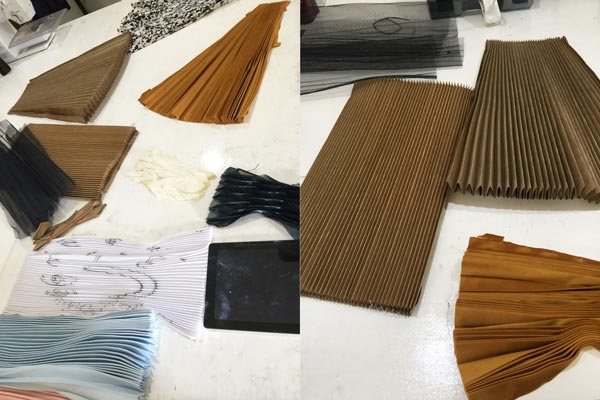 I spotted a blue fabric roll he had amongst his random fabric collection and thought it would be perfect for my outfit, just a slightly different shade to my hat.

We discussed silhouettes, threw around some ideas and Andrew sketched up some ideas. 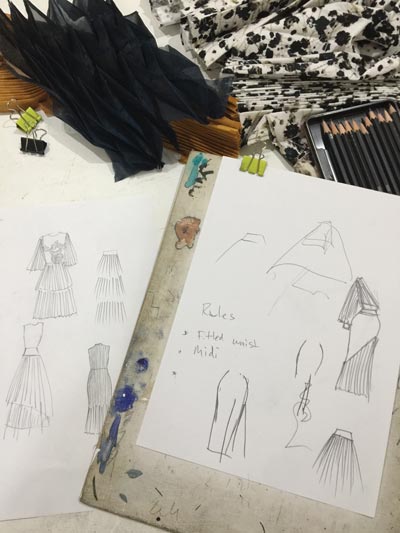 For the pleated detail I wanted my signature silhouette, which is a very fitted waist and midi length pencil skirt. I returned to Andrew’s house a week later and he had made up a mock idea 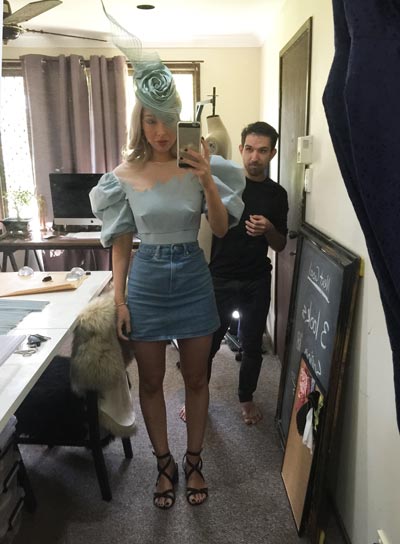 He had made up some feature puffy sleeves, with a sheer bodice that he thought we could embellish or use a jagged edge fabric bodice over, possibly pair with pants as we had been talking about them recently. He had also baked 5 pleated flounces in the oven.

Although I did LOVE the idea of pants- as pants are huge this year, I wasn’t so sure about the design elements of the puffy sleeves mixed with the bodice detail, pants and pleats.

I thought maybe a plain pencil skirt with the pleats cascading down around it would look amazing.

We pinned some fabric to look like a pencil skirt. Loving the tulle bodice feature, I decided I wanted an asymmetrical hem with tulle on the bottom. 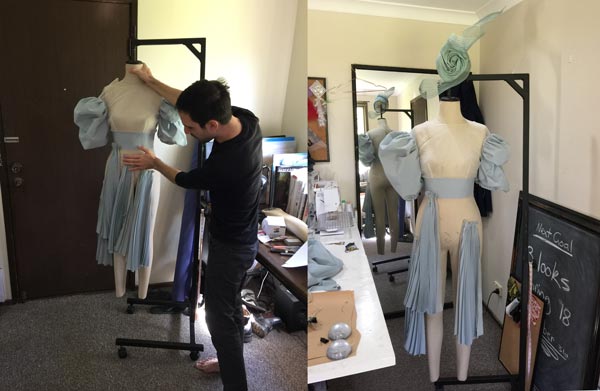 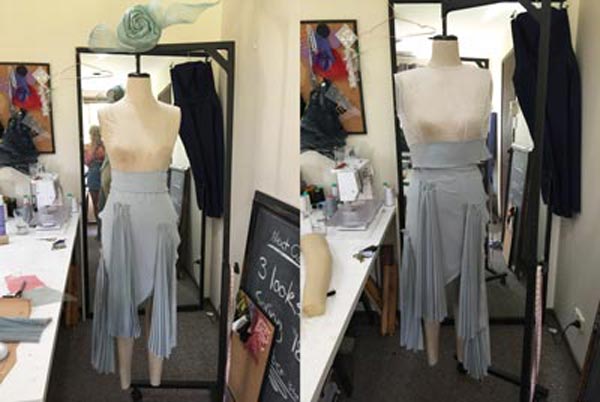 Over the next few weeks, Andrew made the dress and painted the tulle bodice in the same blue colour as the dress. 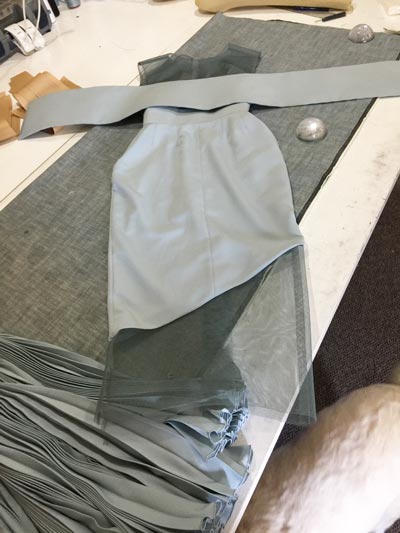 We also played around with the idea of having a bodice piece that wrapped around the shoulders, but I would have to commit to not being able to move my arms all day… 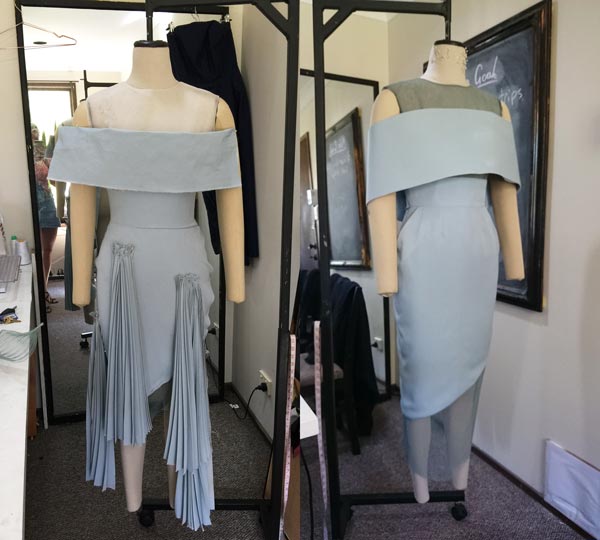 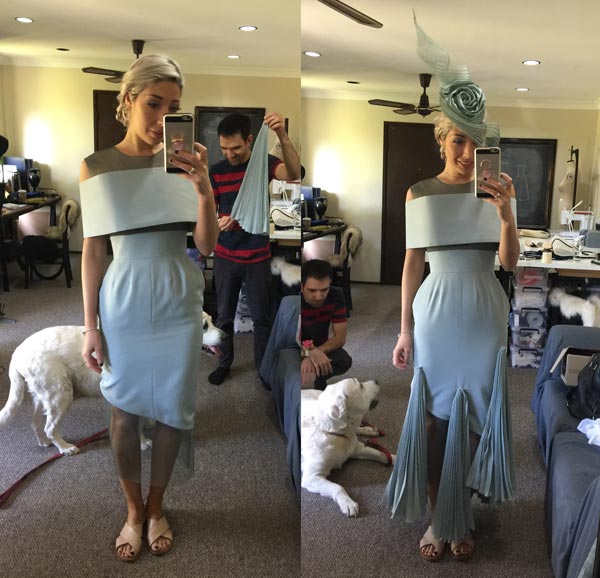 When I came over the next time, we played around with the position of the pleats, moving them around till they were just right. 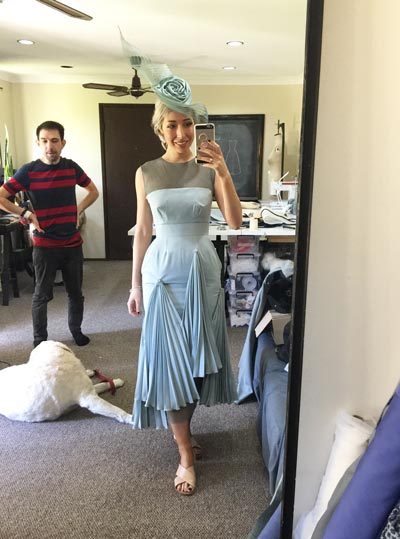 I wore this dress to my judging event in Cairns and was so in love with it, I decided I wanted to wear it again on Melbourne Cup day. I would just make a few slight changes to the millinery and accessories. 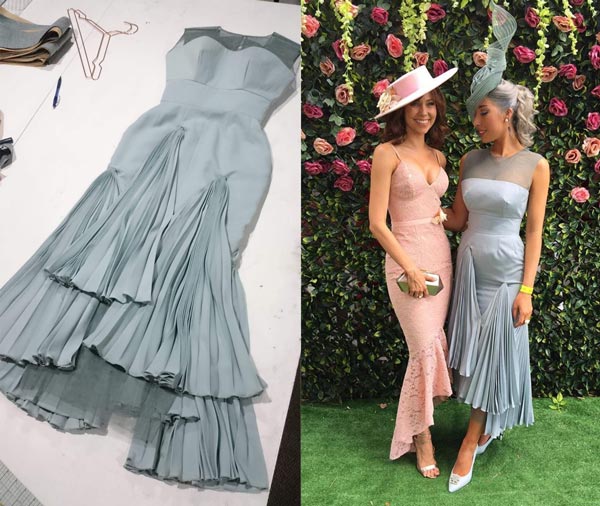 During the day in Cairns, I had a drink spilled down my top. Argh! Luckily, the culprit was a vodka soda, but it still left a noticeable watermark.

I took my dress to 2 different dry cleaners who said they would have to immerse it in water. As the pleats on the dress were baked in the oven and the tulle bodice was painted, I did not think it would turn out well, so my next option was to embellish the dress to hide the stain.

I set out on the hunt for some blue lace to match the colour of my dress and visited numerous fabric stores. It is here I really started to notice what a unique colour it was and how hard it was to match. 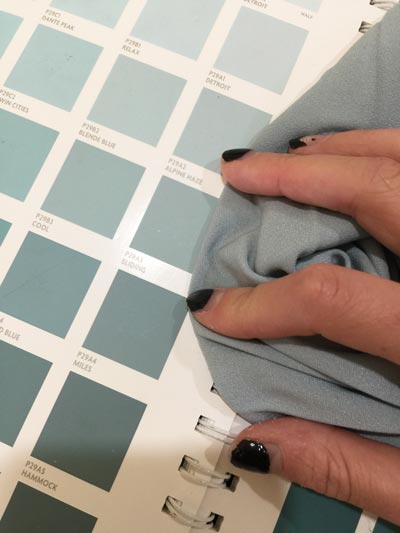 It is a blue grey colour with a touch of green and all the blue laces I found at fabric stores were either too blue or too green. I finally gave in and purchased some blue lace fabric from Alla Moda in Brisbane and decided to just ‘give it a shot’, I figured if I used a mix of blue beads on top of the lace then it may just tie in together. 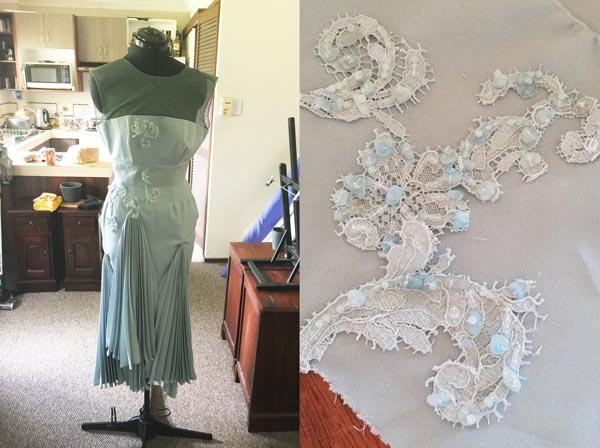 The lace looked ok, but I really didn’t love it, but I was desperate.

I went over to Andrew’s house the next day, with my dress and the blue lace pinned onto the dress to show him. We both agreed it was no good, it was too heavy and just didn’t suit the rest of the dress.

Luckily, he had a roll of white lace fabric that had a beautiful embroidered flower pattern on it, but it still looked very simple and elegant. We cut some flowers out and pinned them on, the perfect addition to the dress. 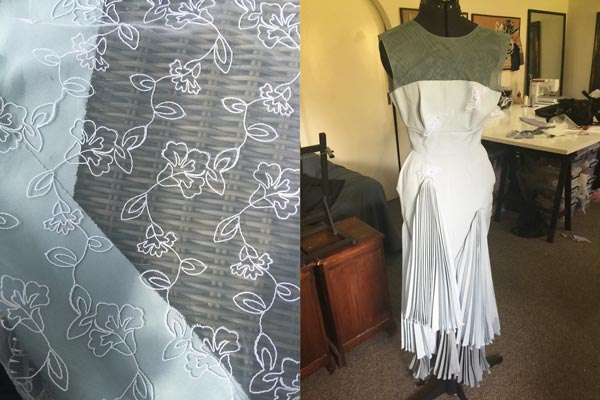 Andrew gave me some fabric and I took it home to paint. I used acrylic paint and mixed blue, black and white together to create the same shade as my dress. I then used a sponge to lightly dab over the lace, careful to only do a thin coat. Once dried, I cut out the flower shapes and beaded them with aquamarine stones and beads. 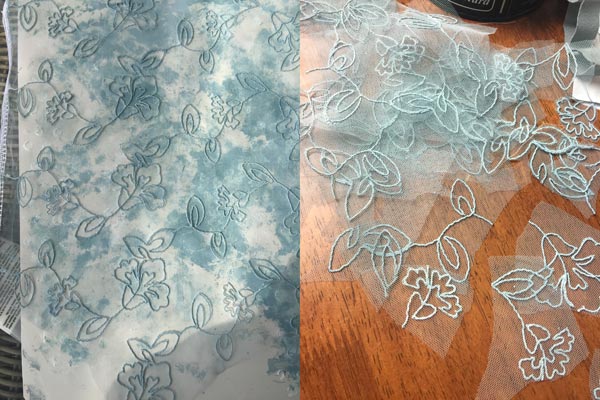 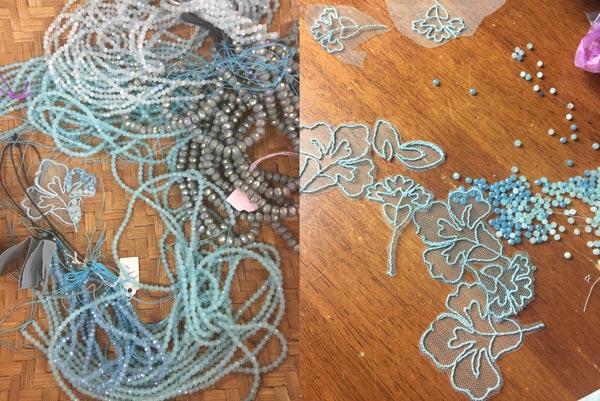 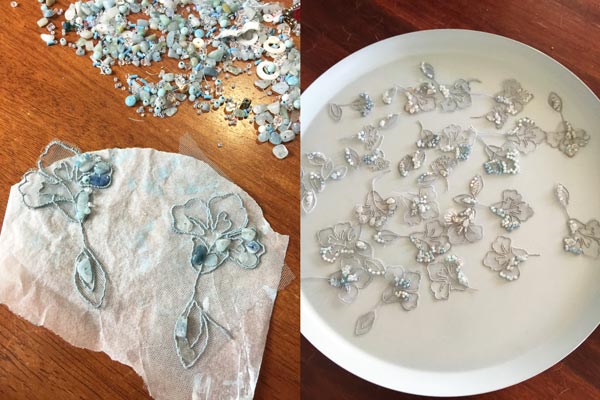 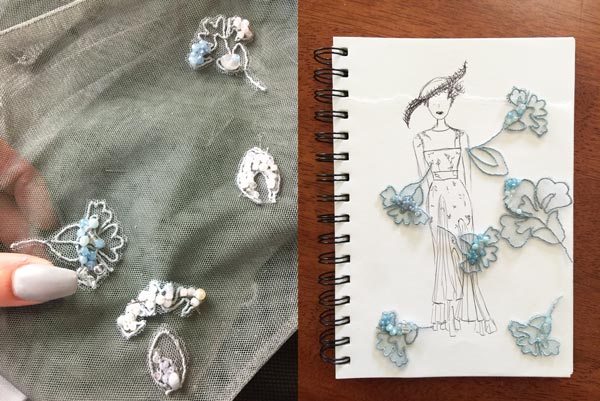