2018 Myer FOTF State Finalists | The Story Behind Their Winning Outfits

October was a jam-packed month for Fashions on the Field, with five of the state finals held around the country. For the first time ever, the state finals introduced an innovative new way to enter; digital format via a photo competition!

The 2018 winners have now been announced for New South Wales, South Australia, Queensland, Tasmania and Western Australia. As per previous years, the Victorian state finalist will be chosen from the three winners of Derby Day, Melbourne Cup Day and Oaks Day. The six state winners will then compete for the coveted Myer Fashions on the Field National Winner title, on stage at Flemington on Oaks Day.

It’s an exciting time for me, as I love hearing about how each finalist came up with their outfit.

Call me nosey, but I love the details and tend to ask a thousand questions! I want to know how long it took, what brands they are wearing, the personal anecdotes that go along with how they pulled together their own individual look…everything!

So, for other lovers of racing fashion stories, I have compiled the tales behind our state winners’ amazing outfits… 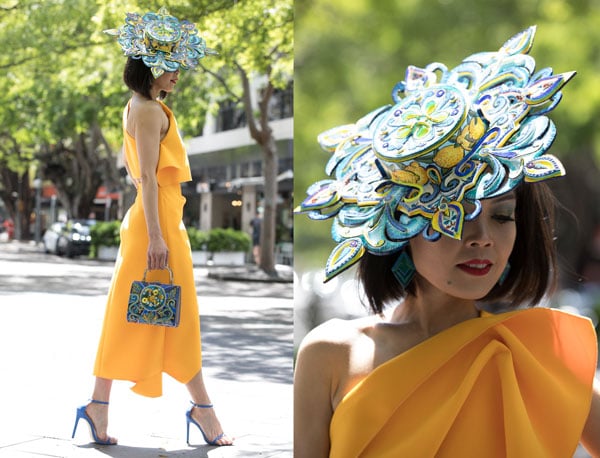 Elis wore a canary yellow top and skirt set by Myer brand Acler. She first saw the set worn by Lana Wilkinson in August and hunted it down, specifically to wear to this competition.

She enlisted the help of Melbourne-based milliner Zorza Goodman, from Taboo Millinery, to make her a hand-sculpted and painted boater style hat in a contrasting colour to her outfit.
Zorza said that over 200 hours were spent hand painting this work of art which she began work on in August. Zorza also painted Elis’ hand held clutch in an intricate pattern to match the hat, an element that brought this outfit to the next level. 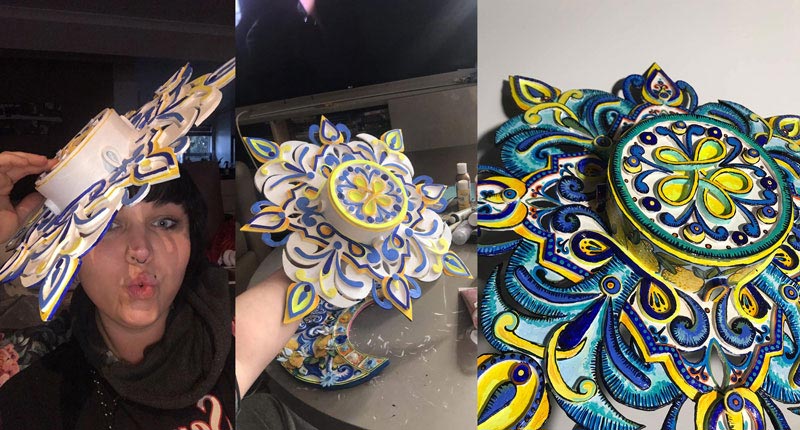 Elis finished off her look with blue Tony Bianco heels and earrings from Gorman.

Second and third place were taken out by Chantel and Marlia respectively. 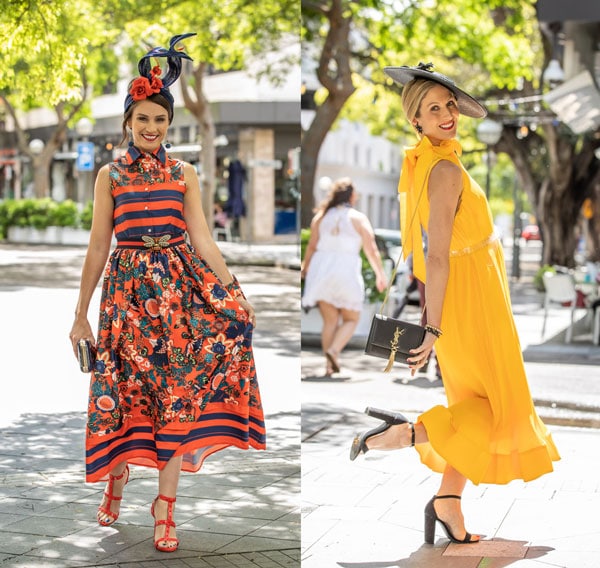 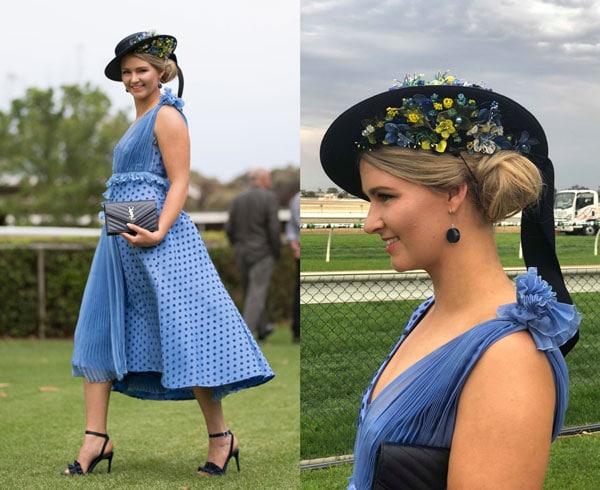 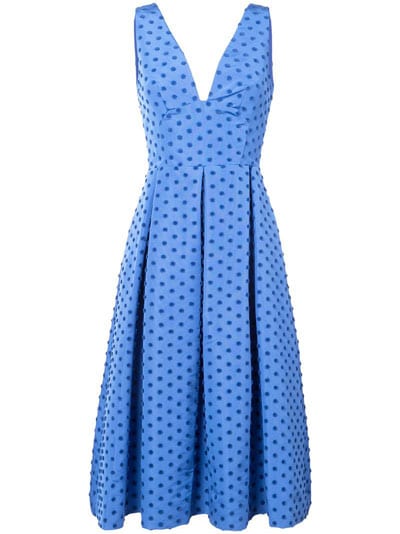 Kimmi started planning her outfit in April, sifting through numerous ideas before settling on this dress. She felt it would be perfect, given a few additions to the design.

She ordered some blue pleated fabric from Specialty Pleaters in Melbourne and researched different ways pleats could be used in dresses. Once settling on an idea, she had her dress redesigned by Di McLoughlin. 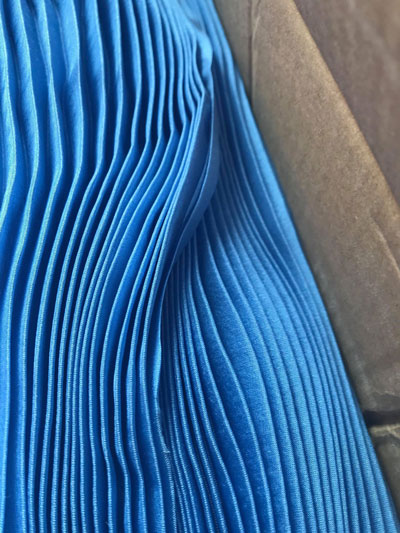 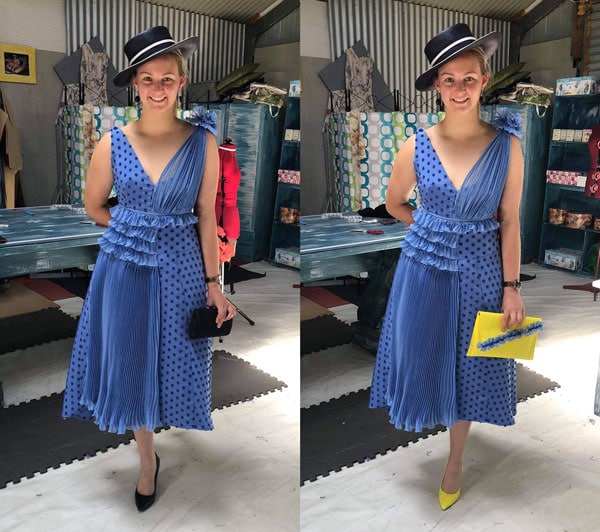 It took two failed millinery ideas before Kimmi settled on the perfect blue boater hat by Helen Mary Millinery. She incorporated a hand crafted flower and bead crown that she had made originally for the outfit, into her new hat, to create the stunning piece that won her the State Title. 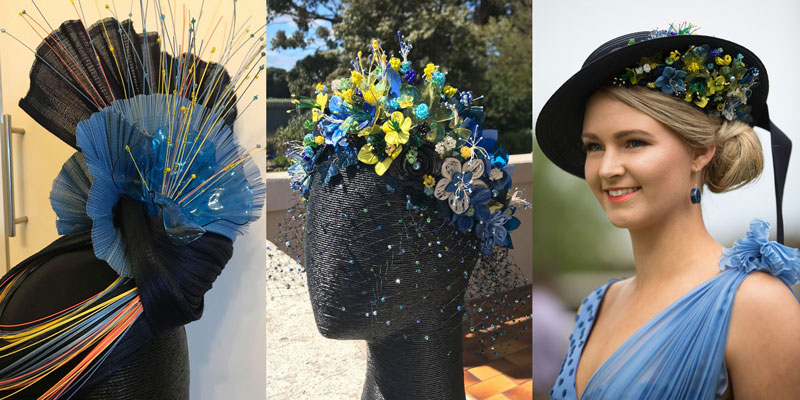 The two hat options Kimmi had made for her outfit before settling on her blue boater.

Fun fact about Kimmi’s outfit is that she didn’t try it all on together till the morning of the event!

Gabriella was first runner up and Tiffany second runner up. 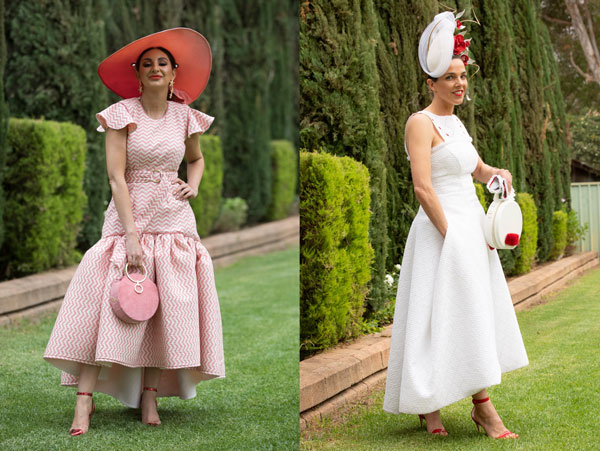 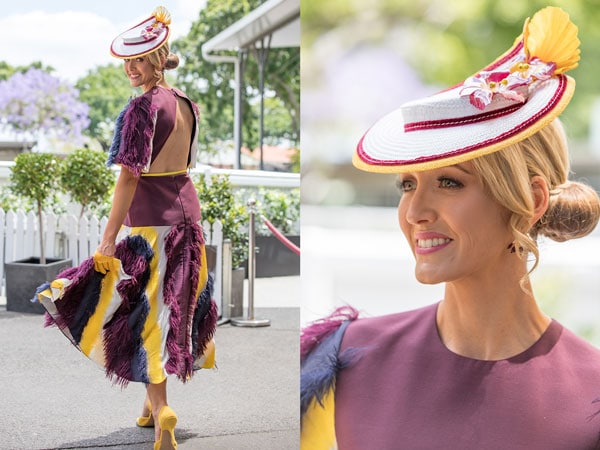 Carle’s fabulous maroon and yellow dress was a last minute purchase from Roksanda, Myer. She made her own millinery, which is where most of the planning took place.
Carle was going to opt for a yellow base, then switched it for a white base to pop with the feature colours of yellow and burgundy.

She accessorised her look with yellow suede pumps from MNG, gloves from Best Dressed Accessories, clutch from Bag Queen and jewellery from Mimco. Oh, and she said she ‘did a Milano’ and sprayed her belt yellow. Love this! 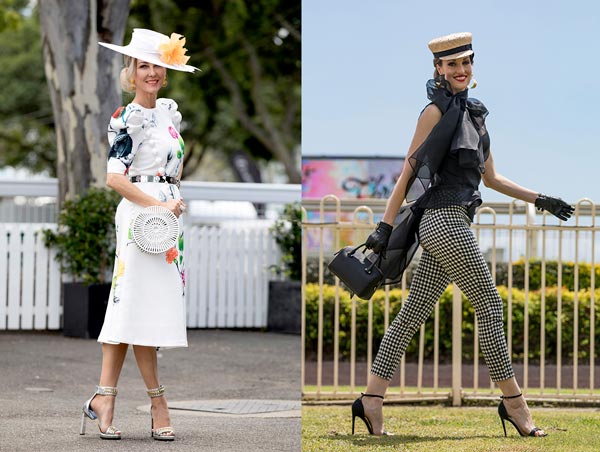 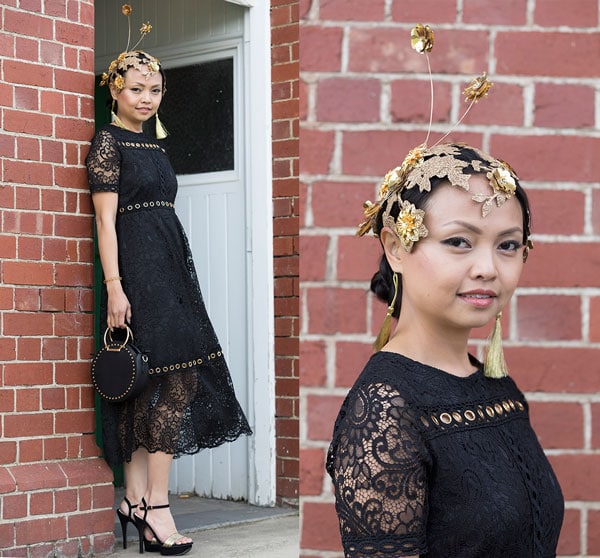 I really enjoyed reading Cynthia’s story in how she became the Tasmanian State Finalist. Cynthia made a last minute decision to enter the FOTF competition, only when she heard about it, 10 days prior to the event. Living in country Tasmania, there are very limited fashion boutiques, so Cynthia decided to wear a black lace dress she had purchased a while ago from brand Aizhe.

After browsing the web and Pinterest for millinery ideas and not finding anything she liked, Cynthia started looking at 1920’s women’s headwear.

With the goal of creating something nobody has worn before, she headed to spotlight and purchased some yellow lace that she painted gold. she also bought millinery wire which she made a helmet frame from, some flower sequin beads to embellish the hat, tassels and fabric stiffener. 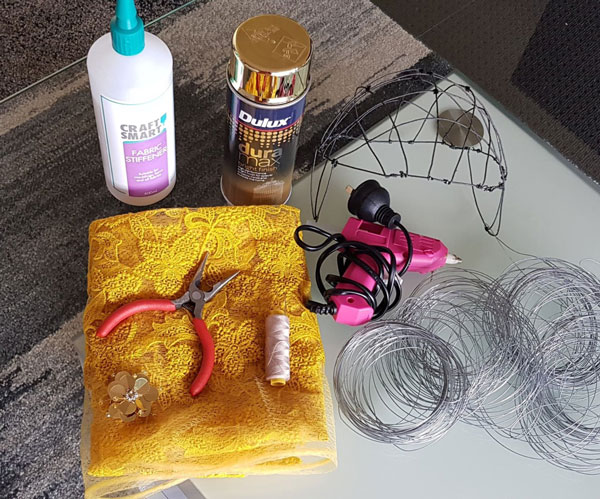 After working on her hat for three days, it was finally finished just in time for the event. 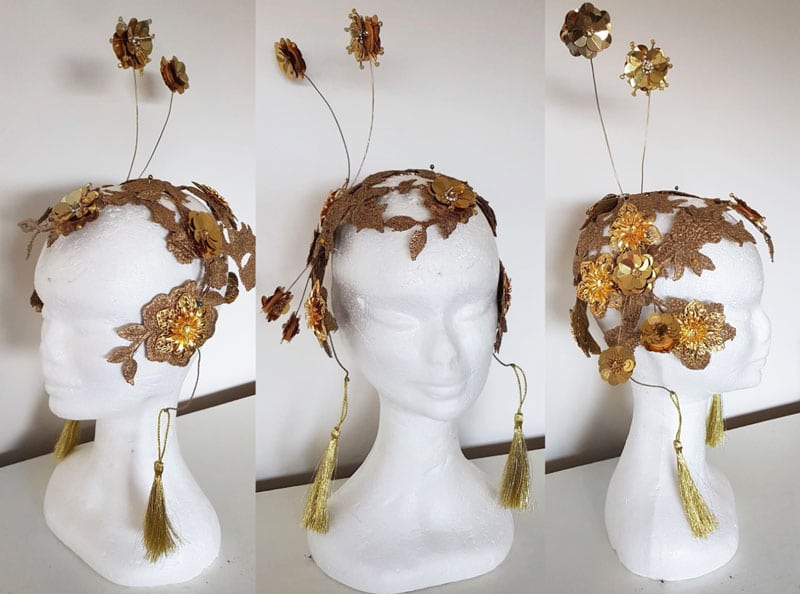 Her accessories were ordered online and her shoes from ASOS (luckily) arrived the day before the Cup. The clutch is from Colette and a ring she made herself from a button! 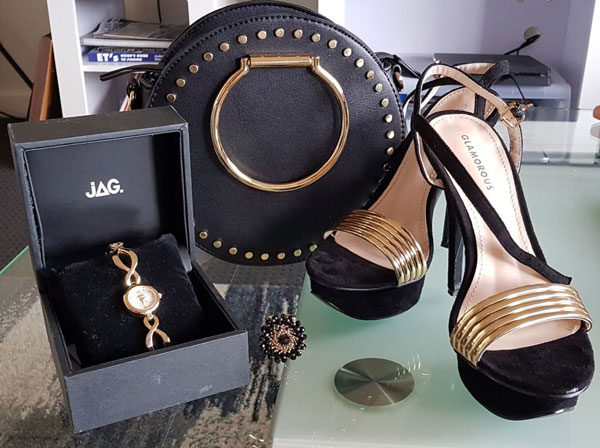 Ellie was first runner up followed by Hannah. 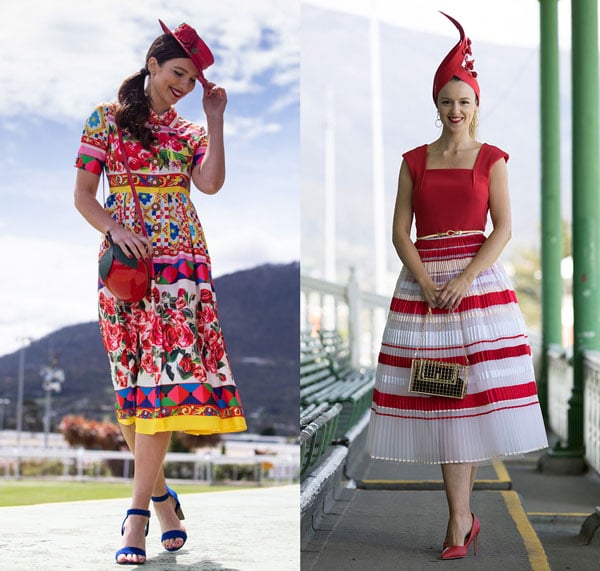 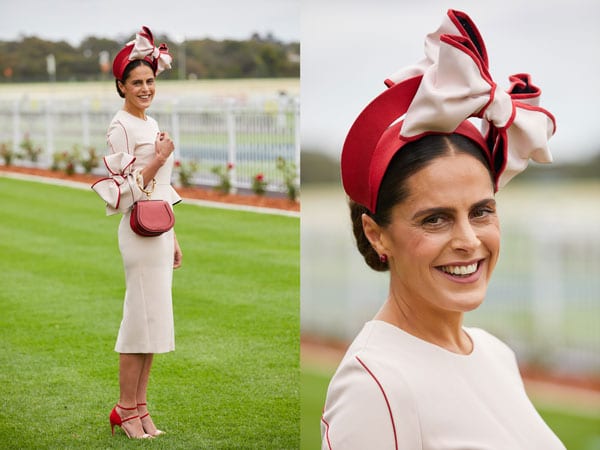 Kate wowed the judges in her pink and red trim dress by Roksanda (possibly this year’s ‘It’ brand). Even though not usually a fan of bows, as soon as Kate tried on the stunning dress, she knew it was the one.

Her red ring Chloe bag was purchased during a trip to France a few months earlier, so she was very pleased to find it matched her dress perfectly.

Kate made her own millinery after finding the same fabric from her dress and continued on the bow theme into her hat. She completed her look with handmade pink and red heels from Jennifer Chamandi in Italy.

First runner up was Elizabeth followed by Bernadette. 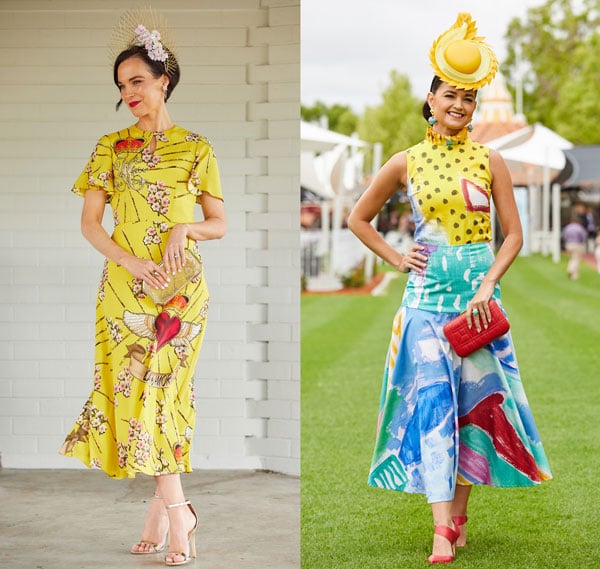 I am so looking forward to seeing who will be crowned the Victorian state finalist and this year’s National Winner!

Do you like reading about the outfit details of our past winners?

Who is your favourite so far? And what do you like about their outfit? Let us know in the comments below.