2019 Myer FOTF State Finalists | The Story Behind Their Winning Outfits

This will be the second year the National Myer Fashions on the Field state competitions have been held via the photo competition format. In previous years, the finals were held throughout the year at various race days with an on-stage competition and winners announced during the event.

Now days, the State finals take place in September and October, some at race days and others at designated locations with photographers roaming around capturing ladies’ outfits with a ‘street style’ vibe. Three photographs are chosen of each entrant’s outfit, showcasing a head to toe look and their finer details. The photos are uploaded to the website www.fotf.com.au for everyone to see.

The photographs are judged by an esteemed panel of judges selected by Flemington. This year the panel consists of:

In the following week, the top 10 are announced via the website and the top 3 a few days later.

The winners from each state are then awarded a 10-day trip of a lifetime to attend the Melbourne Cup Carnival and compete against the other state finalists to be named the National Winner- the highest honour and a dream come true for us race enthusiasts!

As per previous years, the Victorian state finalist will be chosen from the three winners of Derby Day, Melbourne Cup Day and Oaks Day. The six state winners will then compete for the coveted Myer Fashions on the Field National Winner title, on stage at Flemington on Oaks Day. 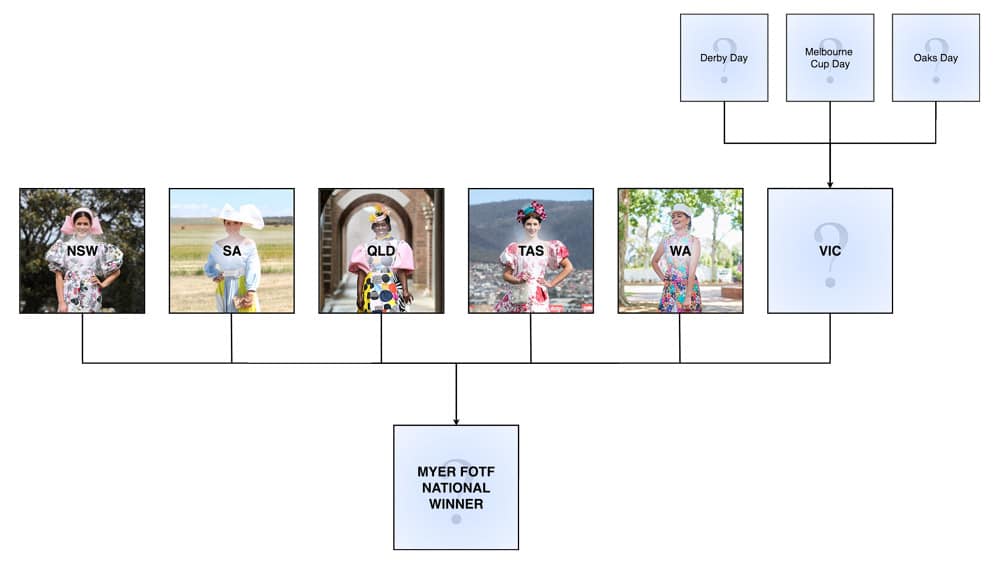 With four State Finalists now named, and two to follow in the coming weeks, It’s an exciting time for me, as I love hearing about how each finalist came up with their outfit.

Call me nosey, but I love the details and tend to ask a thousand questions! I want to know how long it took, what brands they are wearing, the personal anecdotes that go along with how they pulled together their own individual look…everything!

So, for other lovers of racing fashion stories, I have compiled the tales behind our state winners’ amazing outfits… 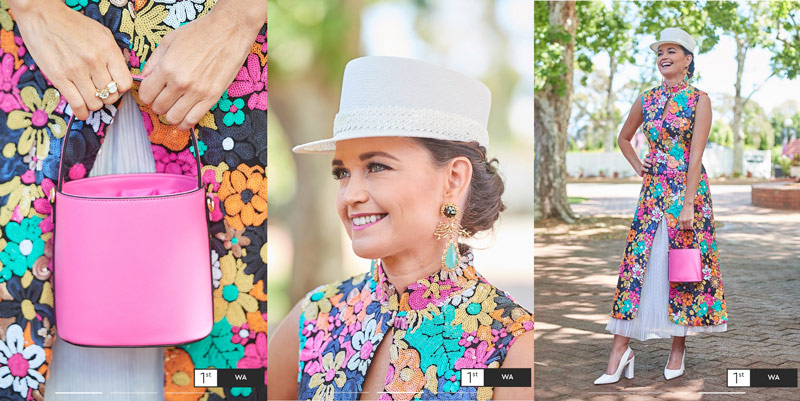 Who is your dress, millinery and accessories by?

My dress is by Kate Watts from Only One Ashley. The millinery I made myself. My shoes were an Asos purchase, earrings by Christie Nicolaides, ring by Mimco, and bag by Olga Berg.

How long did you plan your outfit for and how did you come up with the idea/concept?

The actual planning of my outfit started in April of this year but didn’t come together until the very last minute. I approached Kate early as I knew that she would book out fast like she usually does. Kate asked me if there was any inspiration or trends I was hoping to include but at that stage all I knew was that I wanted lots of colour and sequins.

I found a great plaid sequin online and ordered 5 metres. But like many things that look amazing in photographs; the fabric was not as lovely in real life. The sequins had a very shiny finish and the colours were quite dull. The last thing I wanted to do was simultaneously blind and bore people. 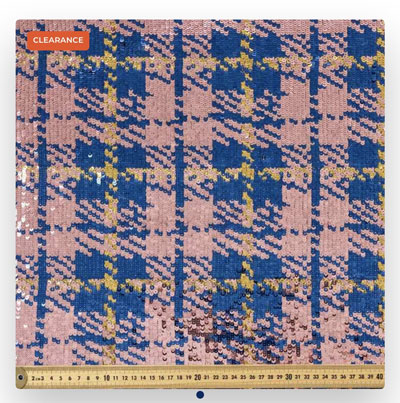 Kate had a large range of sequinned fabrics she had sourced and she threw them at me one by one. They were all great but none quite hit the mark. I then saw the floral fabric she had used in her new spring range. It had a semi matte finish and I loved the colour palette. The design stage was very typical of the relationship I have with Kate. A lot of excitement, a bunch of bickering, oodles of text messages back and forth, and lots of sighs of relief when I finally trusted Kate to execute the design.

Did you experience any mishaps with your outfit? Trouble finding the right shoes/ clutch /colour decisions etc?

The millinery was originally going to be a piece that had more detailing on the crown with yellow veiling and sequins. When it arrived from the milliner I realised it was a touch too elaborate for such a busy dress.

With only a week until finals there was no time to have another one made. There was really no choice but to make it myself. I did a mock up version of the cap in blue straw and then wrote down all the measurements and method so I wouldn’t forget. I had been learning millinery online through Hat Academy for the past year but I still make many silly mistakes, including chopping the peak clean off the crown when I was cutting out the pattern I had traced. 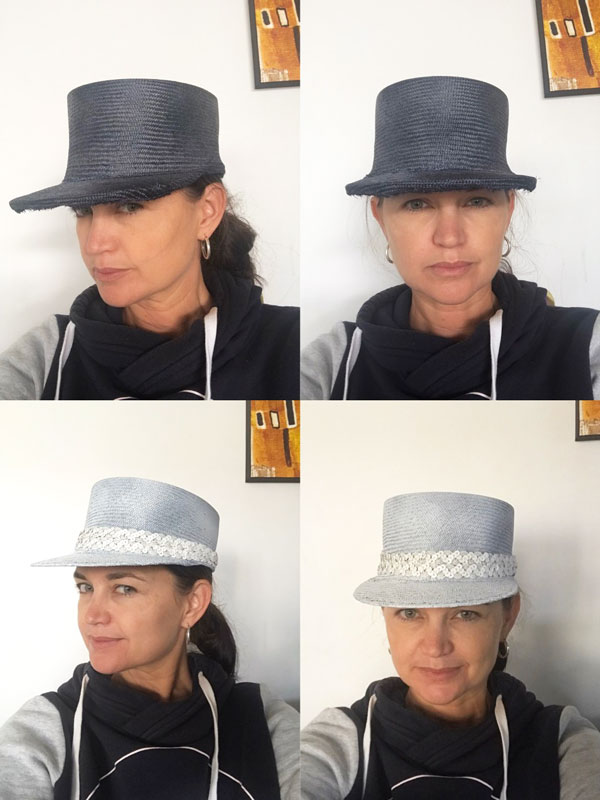 I spray painted the prototype cap white and attached a band of sequins so I could get an idea of how it would look. Once I was happy with it I made the final piece out of some white straw. I didn’t fully finish it until just a couple of hours before jumping on the plane. There’s an aspect of that cap that isn’t quite what it seems, but you will need to ask me in person at the track if you want to know what it is! 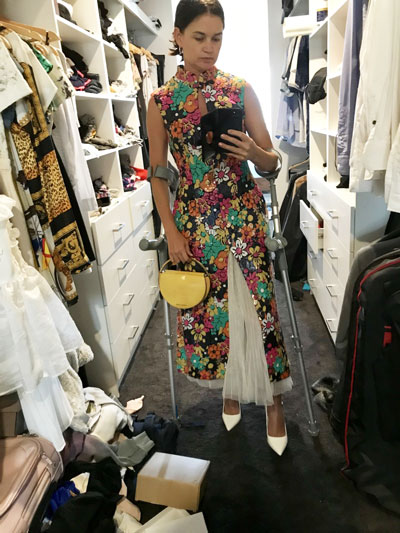 The other problem I discovered when I saw the dress for the first time is that, what I thought was the colour yellow was in fact a muted gold. That meant the yellow veiling I was planning didn’t work and neither did the yellow bag I had already bought. If I added yellow to the mix, then I would be adding an entire new colour and I didn’t want to do that.

I contemplated changing to orange but settled on fuchsia because there were more options around for fuchsia bags as opposed to orange. I trialled some pink veiling on the cap but just couldn’t get it to look right. In the end I was very pleased with the simplicity and crispness of the piece in contrast with the busy dress. 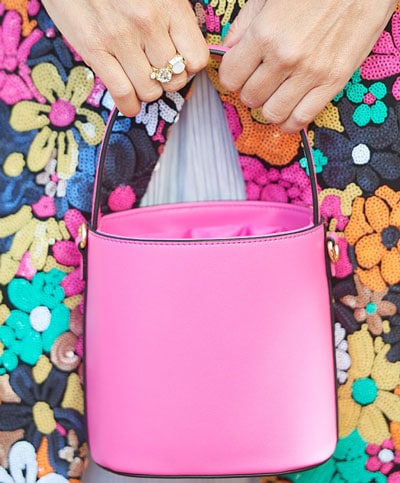 With less than a week to go, I ordered the pink Olga Berg bucket bag and prayed to the postage gods. The place I live is considered remote so it’s not unusual for items to turn up weeks later even when you get them expressed. Luckily it turned up on time a few days later. 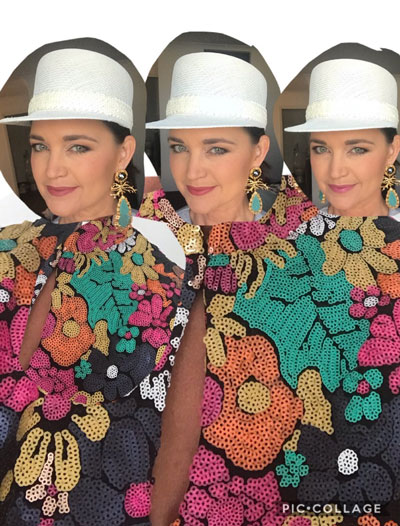 Who will you take with you on the trip?

I will be attending the first week of the trip with my girlfriend Brooke who is like a little sister to me. The second week, my very excited husband Michael will be joining me. He has never been to the Melbourne Cup Carnival and is very much looking forward to all the fanfare.

What are you most excited about on the trip?

I’m looking forward to Derby day, but I feel very lucky to be going at all. A mishap at football training 5 days before our grand final ended with me fracturing my leg and needing a brace and crutches for 6 weeks. My surgeon initially thought I would be out of action for a lot longer and said I would need to rethink my carnival plans. I told him that it wasn’t going to work for me! 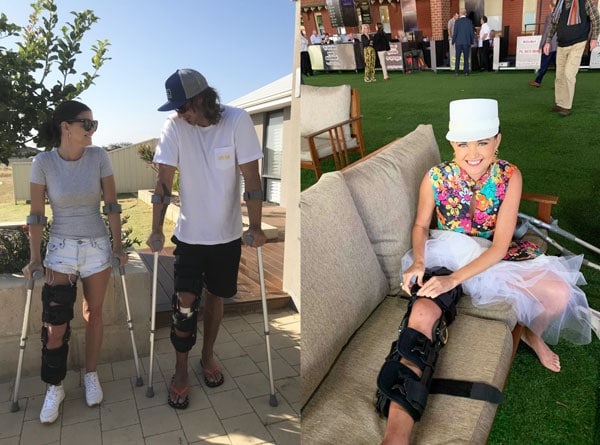 Image: My brother and I twinning with our bung legs & taking my brace off for my state pics.

Thankfully on closer inspection it was better news. Having my picture taken on WA state final day was the first time I had put any weight on it for 5 weeks. My photoshoot only lasted 10 minutes and consisted of me wobbling around, and continuously asking the photographer if I looked as awkward as I felt. That picture of me throwing my head back laughing is me not believing him when he said I looked great.

Are you busy planning your other outfits now for all the events you will attend?

Oh my lord am I ever. I have Derby and Cup outfits partially complete as I was already heading to the carnival with a couple of girlfriends. I had even shelled out for flights months ago. I still have dresses, clutches and a piece of millinery in transit, so cross all your fingers and toes for me please!

Is this your first time competing at Flemington?

I attended Flemington for the first time last year and competed in the fashions on Melbourne Cup and Oaks Day. I managed to make top 10 on Cup day and went through to the preliminary finals on Oaks. I don’t think I have ever been more nervous walking on a stage before. It was all so much bigger than the meets I have attended. I’m thankful I know a little of what to expect when I get up there again. 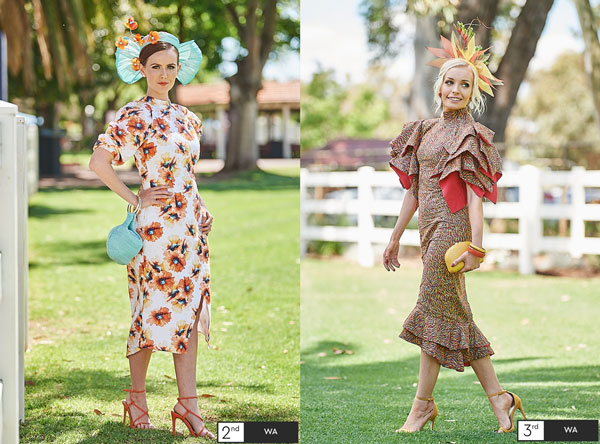 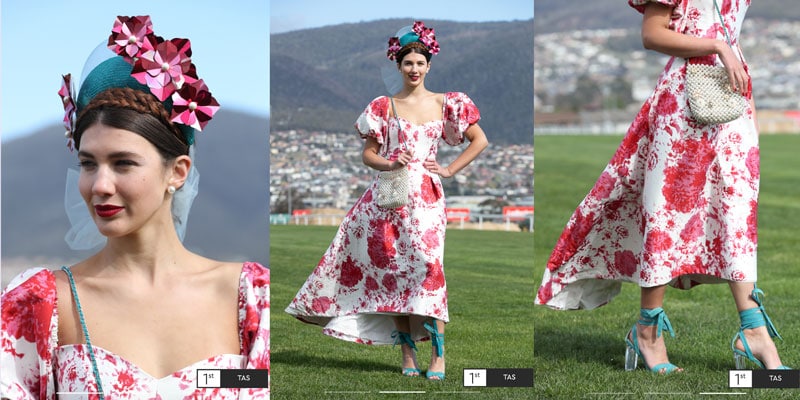 A relative newbie to the world of racing fashion, this is only Ellie’s second year competing in fashions on the field. She had such a great time dressing up with girlfriends last year just for fun and ended up placing as runner up in the FOTF competition, she thought she would try her hand again this year. “I was thrilled to be selected to represent my home state! It’s such a joy to embrace the ultra feminine fashions of the racing season- Both elegance and Drama are encouraged and I love that.”

Who is your dress, millinery and accessories by?

My outfit began with the dress- the puff sleeve trend was too much fun to ignore, and this gown seemed to tick all of the boxes for me. By the time I found it online it had sold out of my size but I decided to buy it anyway and had it altered to fit my shape more perfectly.

I wasn’t as decisive with the millinery, but was fortunate enough to have the beautiful mind of Cessiah from Cessiah Alice Millinery to design and create the gorgeous end product.

How long did you plan your outfit for and how did you come up with the idea/concept?

I had been inspired by royal millinery and had some form of crown in mind. Cessiah suggested a blocked crown after seeing my dress so we just went with it, developing ideas as the outfit came together.

When I found the pearl bag I sent a photo to Cessiah who then added pearl centres to the flowers. 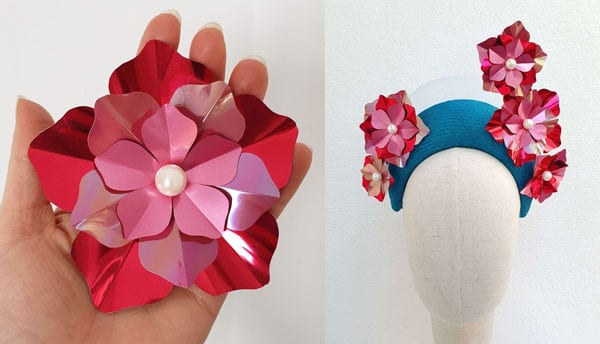 The tulle bow at the nape of my neck was literally a last minute addition and I’m so pleased as I feel like it made the outfit more unique. 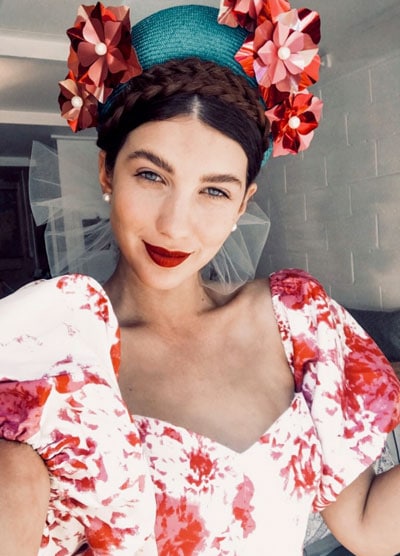 Did you experience any mishaps with your outfit? Trouble finding the right shoes/ clutch /colour decisions etc?

My shoes were originally blush pink, which I purchased on holiday in Hawaii after unsuccessfully being able to find a pair which colour matched my headpiece. They still looked fine, but I really REALLY wanted them to be turquoise. So I painted them! I was slightly terrified what the outcome may be but was so happy I took the risk. 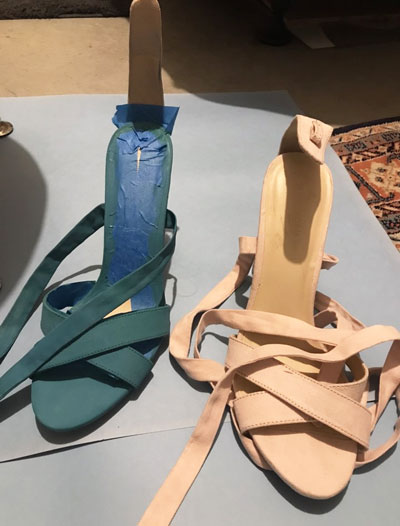 Last minute touches were added the night before- I embellished my bag by sewing different buttons on the front and threaded turquoise ribbon through the chain of my bag. 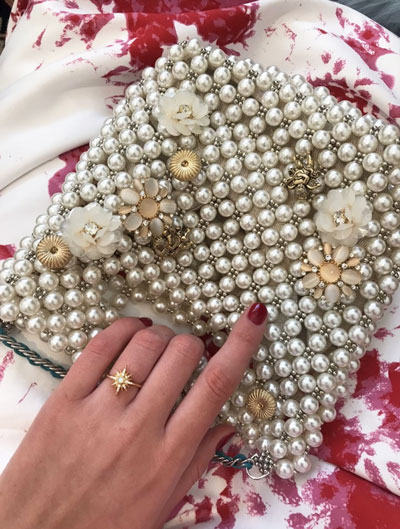 What are you most excited about for the trip?

This will be my first time at Flemington racecourse. I’m so excited to see all of the stunning outfits over the racing carnival. 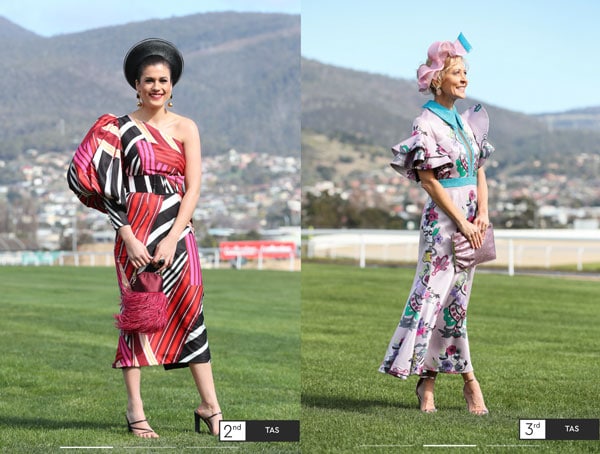