An Interview with China’s only Milliner Elisabeth Koch

The train raced through the bustling city of Beijing. I looked around, realising the only other foreigner besides me was my mother, Cool Marge.

As I sat, in awe of my surroundings, I was so grateful that FOTF had brought me here and given me this experience. 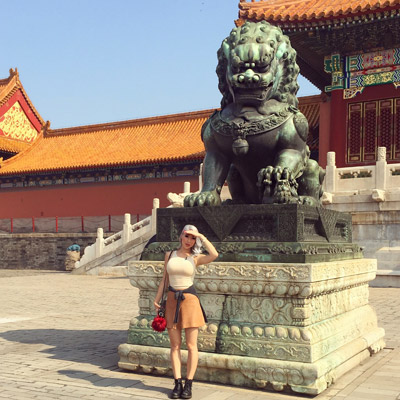 How I ended up in China

My journey began with an idea for a dress, a meeting with my friend and dress maker Andrew Semple, weeks of sewing, problem solving and finally wearing the finished product to Tattersall’s Girl’s Day Out Race Day one sunny Saturday in December. 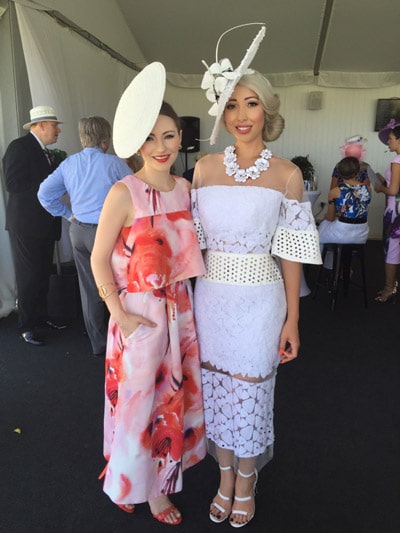 Lucky enough to win first place, the amazing prize was a trip for two to one of four destinations; Tokyo, Beijing, Singapore or Shanghai. I chose my mum. And then we chose China.

Amongst the many amazing sights, sounds and tastes we enjoyed during our trip, the highlight for me was having the opportunity to meet China’s one and only milliner, Elisabeth Koch.

Since moving to China 9 years ago, Elisabeth has really made her mark there, designing, making and teaching the Chinese about the art of hat making.

Her most important achievement was being featured on the Cover of Vogue China’s 100th edition, worn by the most famous actress in the country, Shu Qi!! Special. 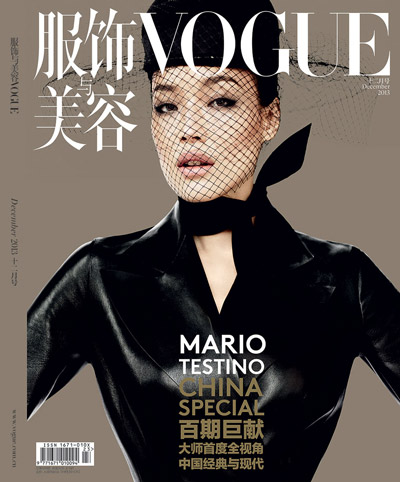 I must say I was a little star struck and a little nervous to meet Elisabeth, so it was a refreshing surprise to find her so incredibly down to earth and willing to share her time with me. 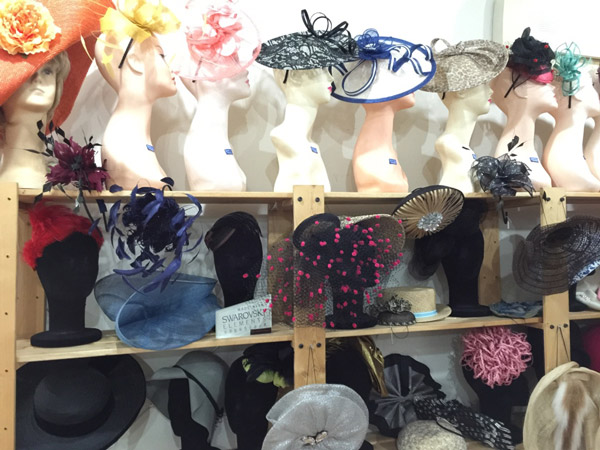 Elisabeth was kind enough to answer a few questions, providing me with some insight into what it’s like being China’s only milliner…

Milano: Can you tell me a little bit about your background, where you grew up and how you got to where you are today?

Elisabeth: I grew up in America but my parents are Dutch. I have a very crafty family; my whole family makes things. My mum was always sewing dresses for us and my dad is a DIY hero. When I was young if my barbie dolls didn’t have it, I’d make it for them.

When I was 13 we moved to Berlin, then to Luxembourg, where I graduated high school. Then I moved to the UK and graduated university with a degree in Communications.

I then moved to Amsterdam and into the world of finance, ending up in the marketing department of a bank in Brussels. During this time, I’d go home every night and create things, sew, draw and knit. I was always making things.

Shortly after I married my husband, he got a job in Beijing and we had to relocate. I didn’t know what I was going to do there, but I did know it was my chance to do something I really love, something with my hands.

I didn’t want to spend years learning to make shoes or dresses and I’m really not into jewellery, I never wear any, and I thought ‘I can make hats, I’ve always loved hats!’

Even before studying hats, I would make fascinators and hair pieces to wear to weddings and I loved collecting vintage hat boxes. My own wedding invite even requested guests to wear hats. 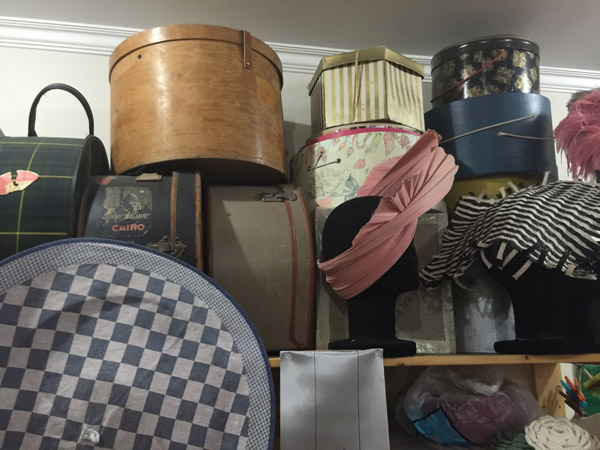 So I went online and started a course at the Wombourne School of Millinery in the UK (near Wolverhampton). I loved the course and bought a bunch of hat moulds.

The minute I got to Beijing, I hit the ground running. I got labels made, business cards, flyers, a website- it wasn’t easy.

Then it was getting out there and telling people. You really have to wear your own creations. 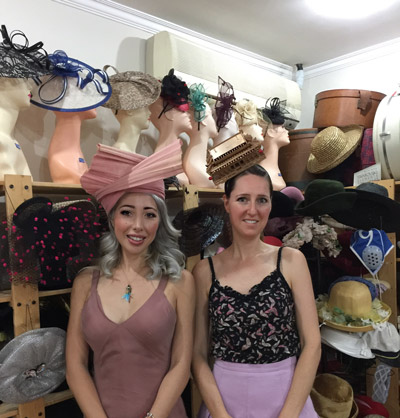 What is the hardest thing about being a milliner in China?

Definitely the language barrier. I have a Chinese assistant who works for me part time and is a huge help. Ordering things online is really, really hard if you can’t read Chinese. 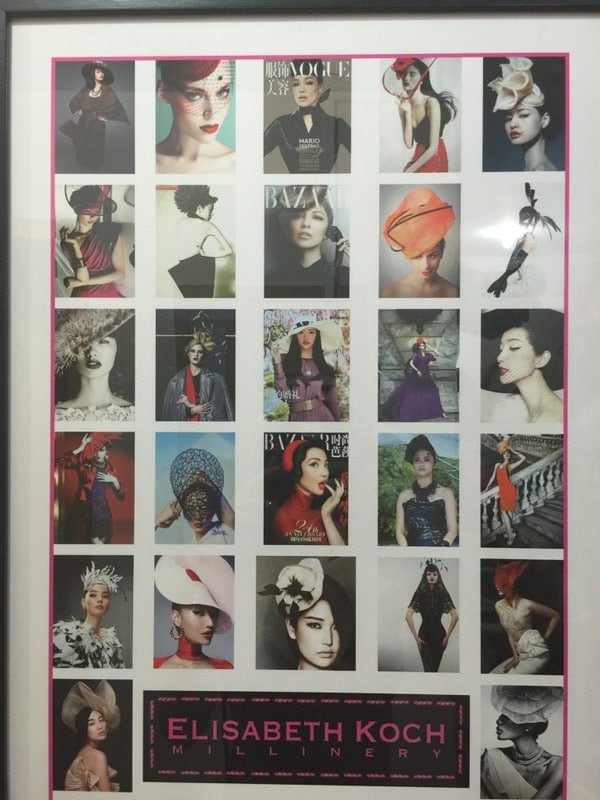 What are some of your proudest achievements and awards?

I’m really proud of my Vogue and Harpers Bazaar covers, and a lot of great press. I’ve also given two Ted Talks because what I’m doing here is really unique and special. 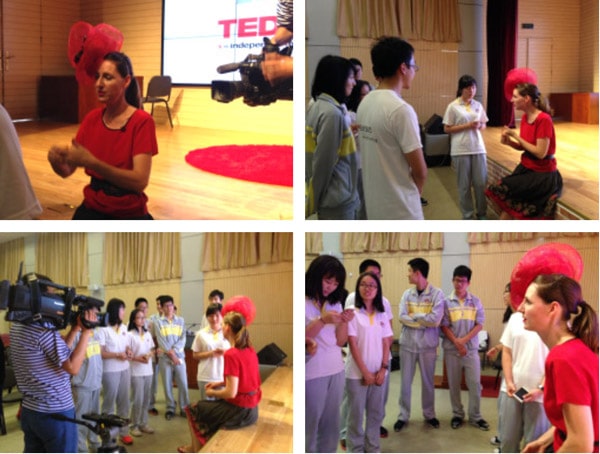 Once I was at a Jimmy Choo event here and I was wearing, as always, an enormous hat that I made. It was on the roof top of the Park Hyatt and this Chinese lady came up to me and she said, ‘Wow that’s an amazing hat’. I told her I made it.

She was overly enthusiastic about it so I asked her who she was. She told me she was the accessories professor at BIFT University (Beijing Institute of Fashion Technology). It’s a really well known fashion university.

She asked if she could bring her students to my studio and of course, I agreed. Now they come every year and I do a demonstration for them.

They were looking at the hat blocks, really confused, then I realised they’d never seen a hat mould before. They make a pattern, cut it out and use a sewing machine.

It was a real ‘ah-ha’ moment for me. These kids only learn mass production and they’ve never seen or heard of a hat mould. That’s when I realised I’m doing something really special.

Where do Chinese ladies wear their hats?

A lot of different places. Outside of Beijing are two polo courses that are big hat wearing events. There are also a lot of events that have hat themes now.

Melbourne cup is celebrated in China too, it’s one of my busiest times of the year and we don’t even leave Beijing! Chinese women also have a lot of tea parties, many Chinese ladies are part of a social club and they often have hat events.

Who is your favourite client so far?

Another one would be Queen of the Netherlands- Queen Maxima, she has quite a few of my hats. She came here for the 2008 Olympics and had a hat made. She’s been buying from me ever since.

The French ambassador’s wife just had a hat made with an Eiffel Tower on it for the National Party Bastille Day on the 14th of July.

As for the Chinese, there’s too many to name every body!! 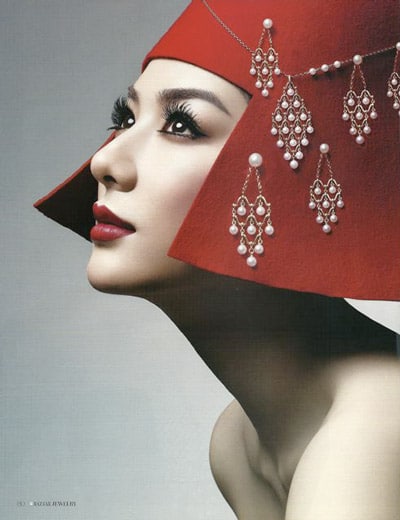 How long does it take from start to finish, to complete a hat?

It depends on the hat and who I’m making it for. If I’m making a hat for a client, it’s usually around a week.

Do you get to go to lots of fancy parties and events?

There are always lots of events and I always wear hats there. Some people might think of me as ‘that crazy lady with a hat on,’ but the people who know me are used to me now.

What was the most expensive hat you’ve sold?

A green wooden dinosaur covered in Swarovski crystals. Each individual crystal had to be stuck on and they all have Hot Fix on them, so you have to make the glue on the back hot with a candle and hold the crystals with tweezers into the candle flame to melt it, then stick it on. 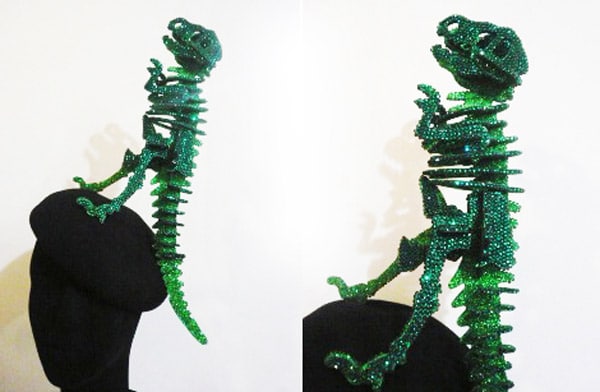 I used the 1.5 and 2mm size crystals, so I had three people work on it for three weeks. That hat actually would have cost three times the amount, if I had known how much time it would have taken!!

Do you have many western clients?

I do, my business started with the western clients. I had loads, but now there are more Chinese for sure.

Part of my business here is doing hat-making workshops. I’m busier with that, than with making hats. I just had a workshop with 40 people. Sometimes I get groups in for a goodbye, farewell or birthday and I’ve had a few hen’s nights. They all put their hats on and go out, it’s really fun!!

The workshop culture is really growing in Beijing. I give everyone the pieces and they put it all on together.

DIY is not Chinese at all. The Chinese are at a stage now where if you can afford it, you buy it, you don’t make it. I wasn’t sure how my workshops would go, all these fancy ladies would have to sew themselves, but it’s been really well-received. 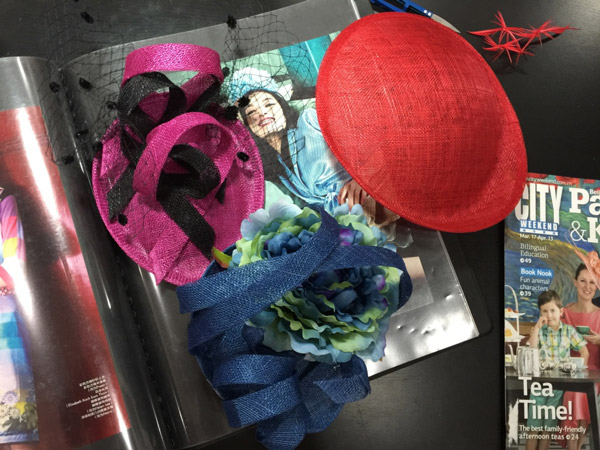 Some hats made in Elisabeth’s classes.

Do you have any future plans to come to Australia to attend the Melbourne Cup?

I would LOVE to!! My hats have been to Melbourne Cup but I haven’t. I once wore a fish tank hat to a Melbourne Cup lunch here and won best hat!

After our interview I looked through some of Elisabeth’s editorials, which you can see in the video below. Very impressive to say the least.

If you’d like to see more of Elisabeth’s work you can check it out here.

A big thankyou to Elisabeth and we hope you will make your way to Australia in the near future.

Are you looking to rent or buy your next hat for the races? Check out Millinery Market, an online millinery marketplace that lets you browse hundreds of hat listings from milliners and race enthusiasts across Australia. 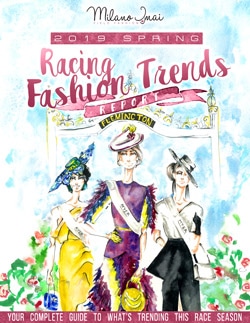