Royal Randwick Photo Competition Vs. Myer Fashions in the Mall Skip to content
Previous Next

Royal Randwick Photo Competition Vs. Myer Fashions in the Mall

Something unexpected happened this year in the world of Fashions on the Field, Sydney. The Australian Turf Club announced they had split ties with long-term fashion sponsor Myer after negotiations to renew Myer’s contract failed.

The question on my lips?

What would happen to the Myer Fashions on the Field NSW State Finals? They are usually held at the ATC’s Royal Randwick racecourse!

In the weeks that followed, both Myer and the ATC revealed their ideas on doing something a little out of the ordinary with their fashion competitions… 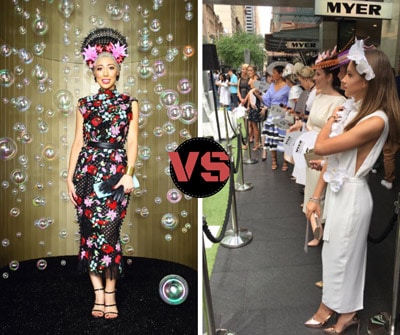 For the first time ever, Myer was going to hold their FOTF state final in a shopping mall! Meanwhile, the ATC decided to ditch the traditional catwalk based fashion competition in favour of a social-media based photo competition! And the ultimate complication?

Both competitions were to be held on the same day! October 8th.

“Can I make it to both events?” I thought.

The cogs started to turn…but before I get into my personal experience with The Amazing Race, here’s a brief overview of the structure of each event.

Myer Fashions in the Mall

The Myer competition was held at Pitt St Mall, outside the entrance to the Myer store.

There was a sectioned off area, which included the judges table (suitably decorated with beautiful flowers), some white bench seats for an audience and a small stage. 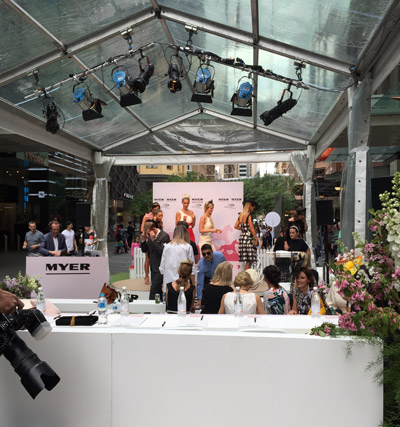 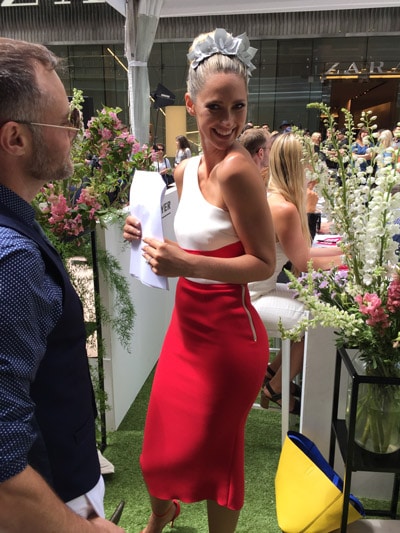 They would also be crowned the NSW state representative and have a chance to win the Lexus sports car at the National Finals. Nice.

On the other side of town, the Royal Randwick had a slightly different setting, one with horses (!)

Entrants had their photos taken by renowned fashion photographer Sonny Vandevelde in a booth named the Fashion Chute. The space was complete with mirrors and dangling champagne-inspired bubbles and beads.

It took only a minute and then entrants could go about enjoying a day at the races. Later in the afternoon, the 6 finalists were sent text messages which welcomed them back to parade their outfits in front of the judges. 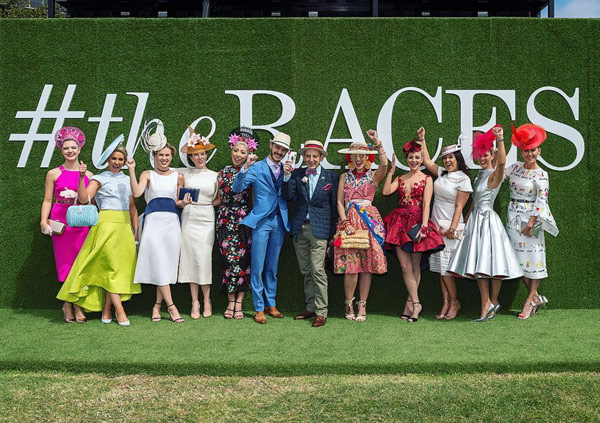 The Myer FOTF registration was open between 11:30am and 12:30pm and you couldn’t pre-register. The Randwick photo booth was open from 11am to 2pm, with winners notified at 2:30pm.

I scribbled down a rough schedule. Attending both events seemed do-able. 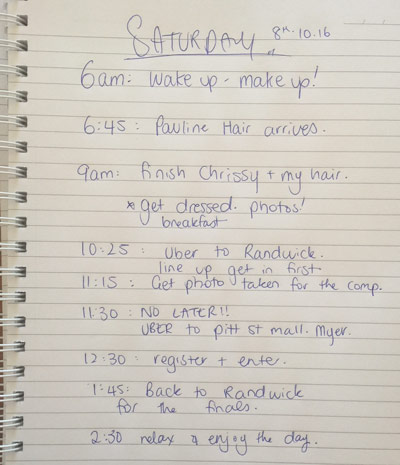 Google maps was telling me the drive would only take 17 minutes, but I was worried Google might be a “glass half full” kinda guy. A second opinion from some Sydney friends suggested more like 40 minutes to an hour and I started to think my timing might not work out. 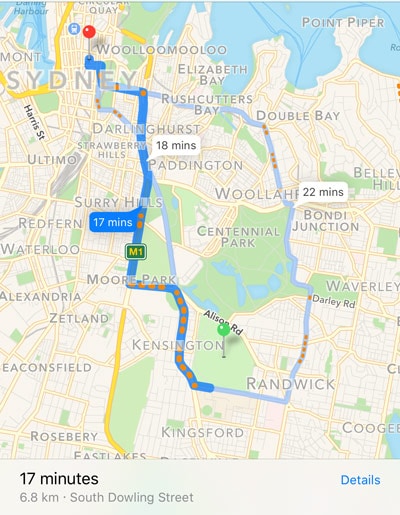 If traffic was bad and the photo booth was busy, I would be cutting it very fine.

Panicky by nature, I hate being rushed and traffic is out of my control. But I decided to give it a try anyway, and create my own edition of the Amazing Race through the Sydney CBD.

My friend Chrissy and I stayed at a lovely Air BnB in the heart of Surry Hills (a 5 minute walk to Messina ice cream I may add, AND, they had a really cute old cat that I spent a lot of time fussing over). 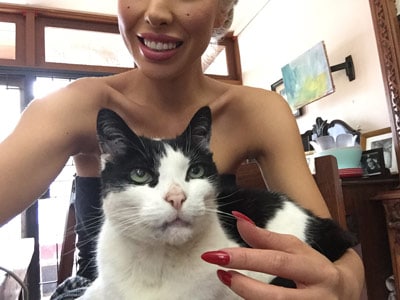 Our hairdresser, Pauline, arrived at 6:45am and she completed both our do’s by 9am. 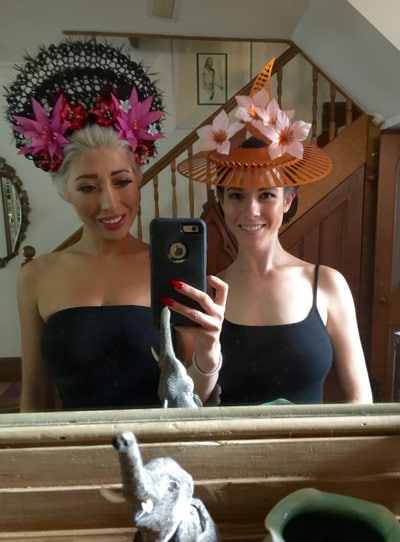 Off to Royal Randwick Racecourse

At 10:20am, we caught an Uber to Randwick and arrived at 10:45am. Already people were lining up at the gates. 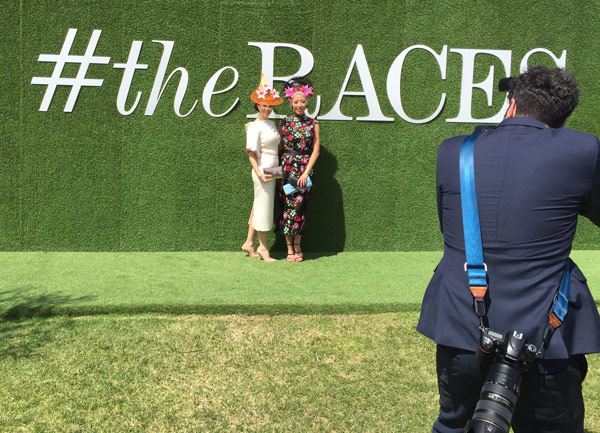 We were first to the booth. No thanks to the 6 different staff on reception who couldn’t tell us where the booth was!

The booth (named the Fashion Chute) was set up on the lawn. It was a silver mirrored box with hundreds of crystal baubles hanging from the ceiling designed to look like Champagne bubbles. A cute touch.

We registered, had a photo taken and were out of there by 11:20am.

Photos were sent to our phones, which made a nice keepsake of the day, even though I hear some women were receiving photos of other entrants and vice versa, but I suppose mishaps are hard to avoid with a new event.

Here’s a photo of me wearing my Night Garden Dress. If you’re interested you can watch a video of how I made this outfit. 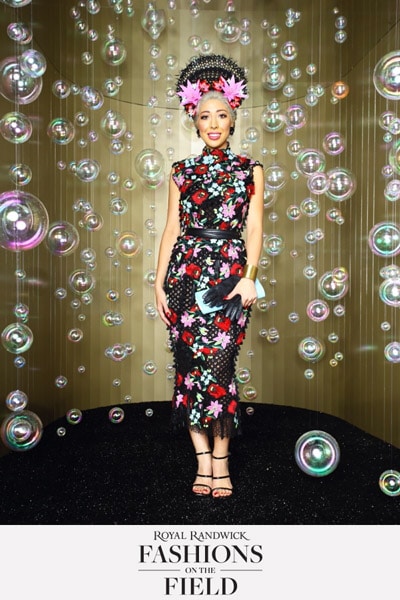 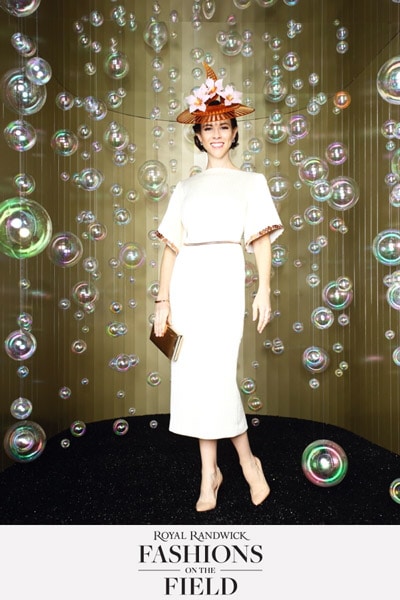 Across town to Pitt St Mall

We called an Uber and told him to step on it to Pitt St Mall, but turned out the traffic was fine and we got there in 20 minutes (all this panic for nothing doh’).

We registered for the Myer Fashions on the Field. There weren’t many contestants but there were quite a few familiar faces.

In total, I think 18 girls turned up. But there was no lack of spectacular outfits. The judges were in for some tough decision-making! 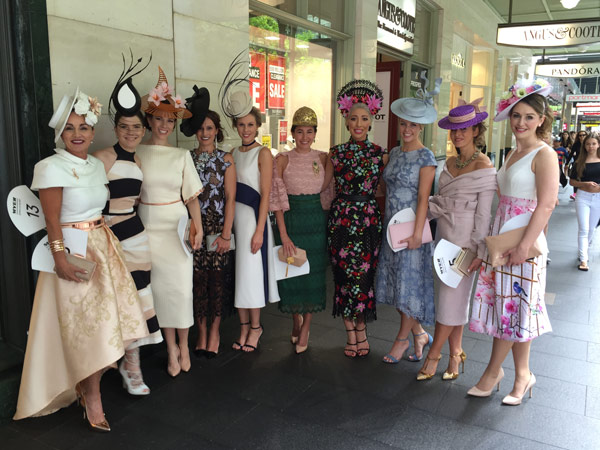 By 12:30pm there were quite a few onlookers, the general public wondering what was going on. It’s not every day you see a bunch of women in hats and fancy get up’s in a mall. 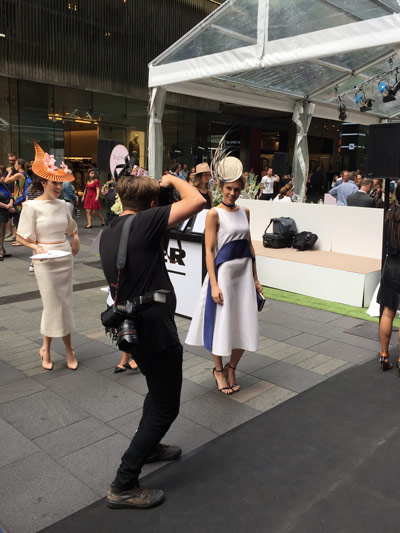 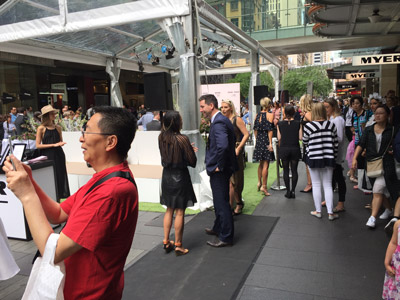 The heats were quick because of the small stage and limited entrants. All over in 20 minutes. 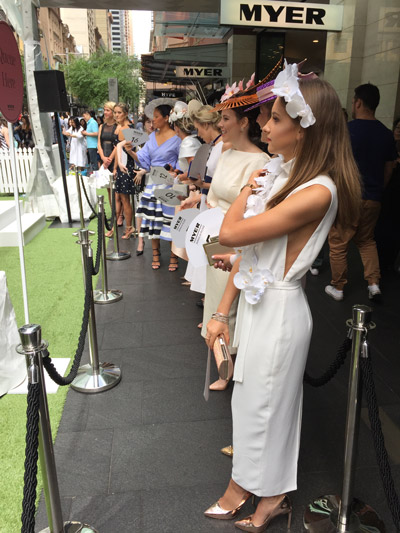 The top ten were announced after a slightly drawn out break and then the three winners.

It just felt like a bit of an anti-climax..without the usual masses of fabulously dressed ladies and countless heats, it really didn’t feel the same. 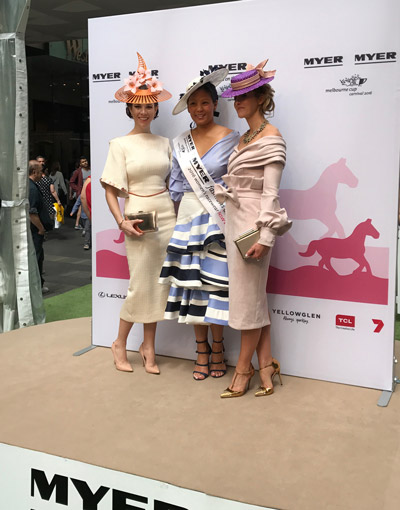 Chrissy came third in a cream pencil dress she made herself with added sequin embellishments to the sleeves and back, her structural copper headpiece by Joanna Roberts and added feather flowers with gold leafing by Peacock Millinery. 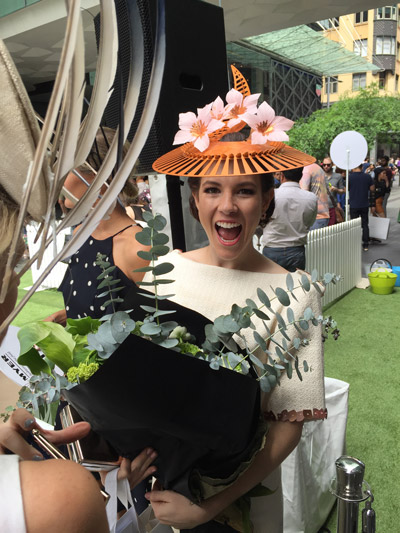 Carle Rutledge placed second in a peach finish powder pink off the shoulder dress by Asilio and purple boater by Madam Hatter. 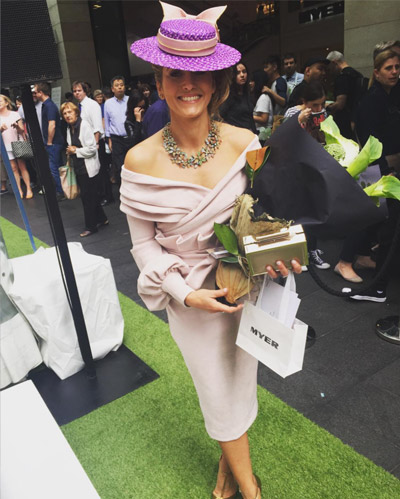 Reggie took out the NSW title (she is also from NSW horah) in a blue, white and black layered stripe skirt she made herself and powder blue ruffled off the shoulder blouse.

Reggie will now compete in the National Finals on Crown Oaks Day in Flemington! You can see who she’s up against in the 2016 Spring Racing Fashion Trends Report. 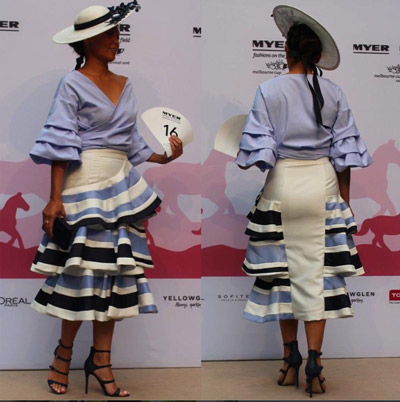 Back to Royal Randwick

Chrissy and I jumped in a taxi, and again with not much traffic, made it back in 20 minutes.

The FOTF women who were there primarily to compete, were all standing around the photo booth area eagerly awaiting a text message. Every time a phone beeped everyone jumped to look at their screen. It was now around 3pm. 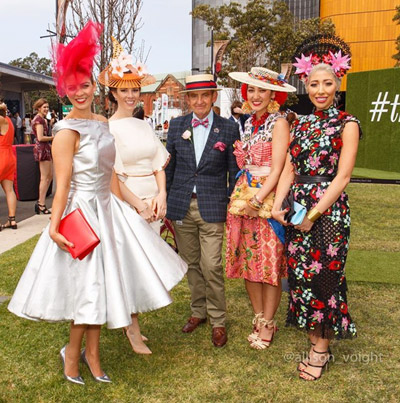 The 6 finalists who had received a text showed up to the booth. 5 women and 1 man were taken to the stage where they were judged and the winners announced.