In what has been a very unusual and uncertain year, the racing fashion community was no exception when it came to succumbing to the perils of the Coronavirus Pandemic.

Usually by midyear, FOTF lovers are excitedly planning their race day looks for the highlight of the racing calendar; Spring Carnival week at Flemington Racecourse.

But this year, things were looking bleak for race enthusiasts around the country as more and more restrictions were put in place, the limited number of people allowed to attend events, not being able to leave their states or even their homes. With no end in sight, we had to accept that for the first time in 58 years, the Melbourne Cup Carnival would go ahead, spectator free. 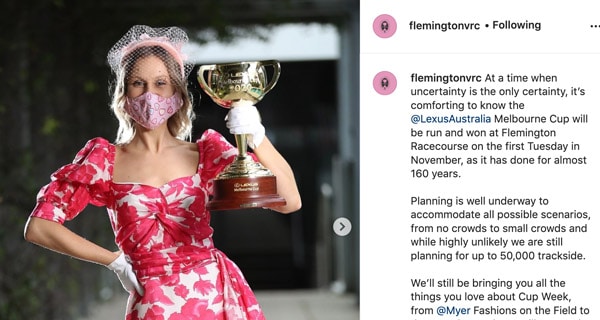 After months of speculation (and hope), the Victorian Racing Club finally released information on the 8th of September that there would indeed be a National FOTF Competition, and much to our excitement; State Finals too. 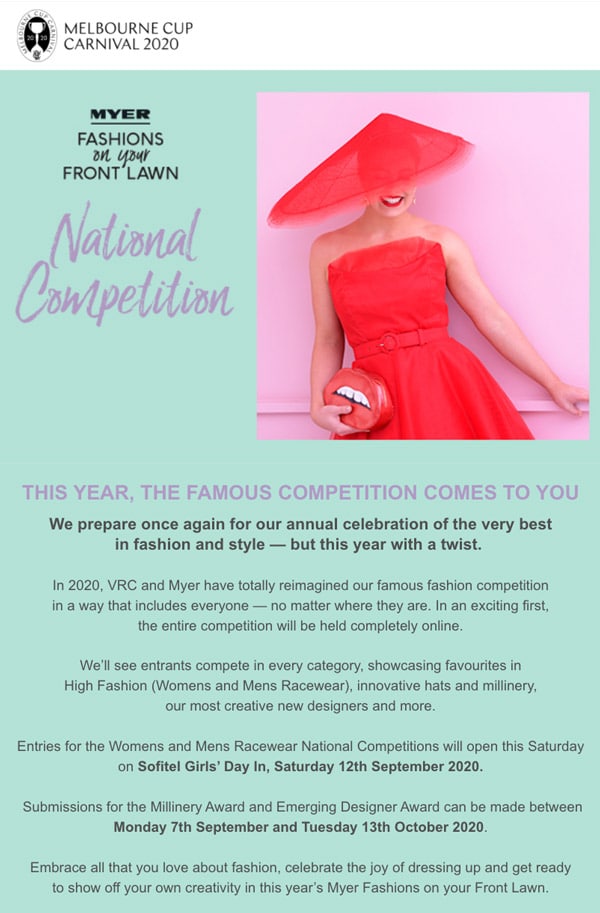 Emails were distributed, which outlined a whole new format; for the very first time in its 16 year history, the 2020 Myer National FOTF competition would be held entirely in a virtual format, named ‘Fashions on your Front Lawn’.

Along with some exciting new changes, this would also mark the first year the NT and ACT would be included in the ‘State Finals’ with a representative selected to compete in the National Final.

And in following with the theme of inclusion, for the first time there would be a men’s State Final and a National Winner selected. 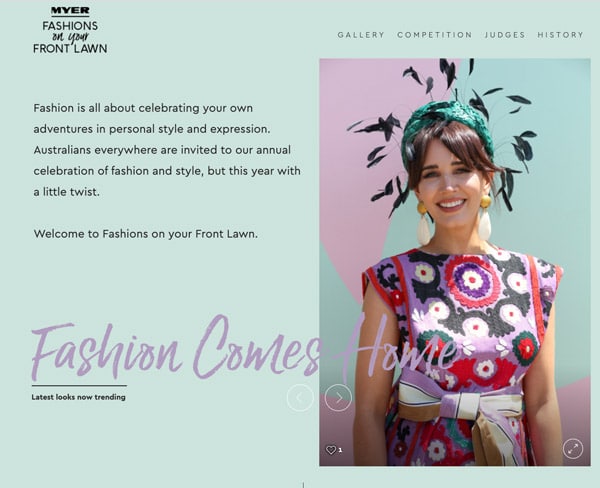 Entrants were given four opportunities to dress up in their race day best, snap some photos in or around their homes, and submit entries via an online registration form. The virtual competition focused on enabling entrants to participate no matter where they were in Australia or what their restrictions were.

Entrants were asked to submit three photos showcasing their outfits from different angles and some close ups of special details, millinery etc. Entrants had the option to use a professional photographer if they liked. 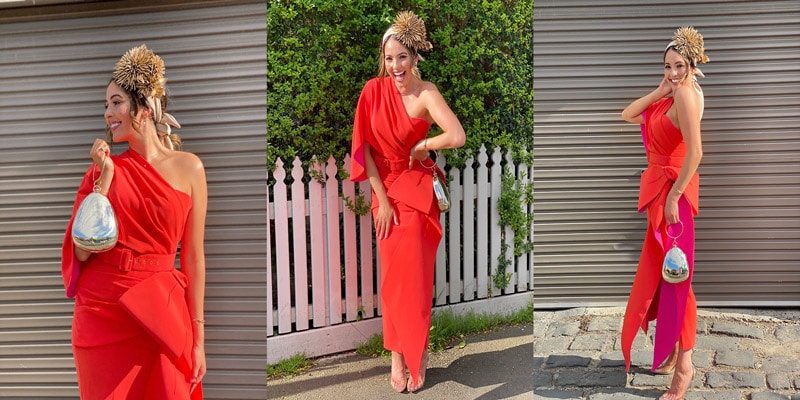 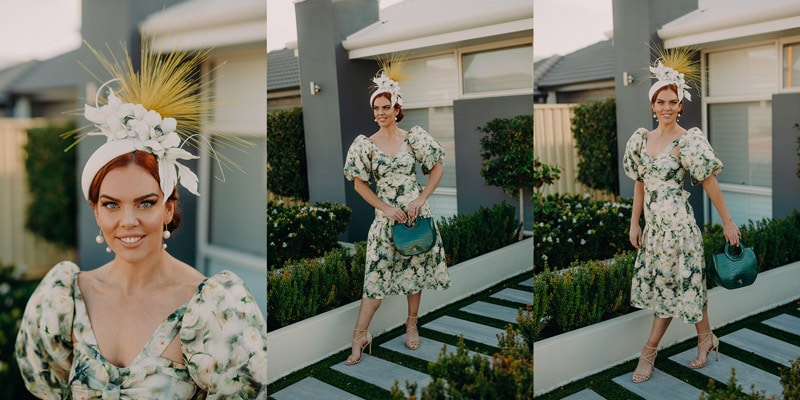 There were two different entry dates given to different states/territories. 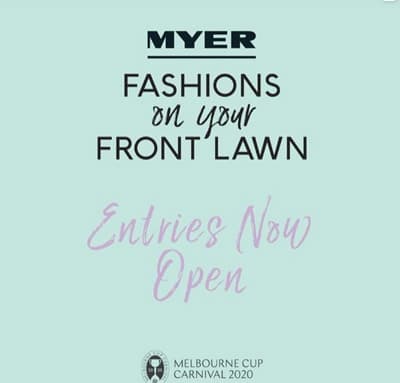 Entries for QLD, NSW and VIC also opened on the 12th of September, but closed on the 17th of October 2020. The variation in dates was to provide organisers with enough time to upload entries to the Fashions on Your Front Lawn website and to allow the judges time to pick winners. 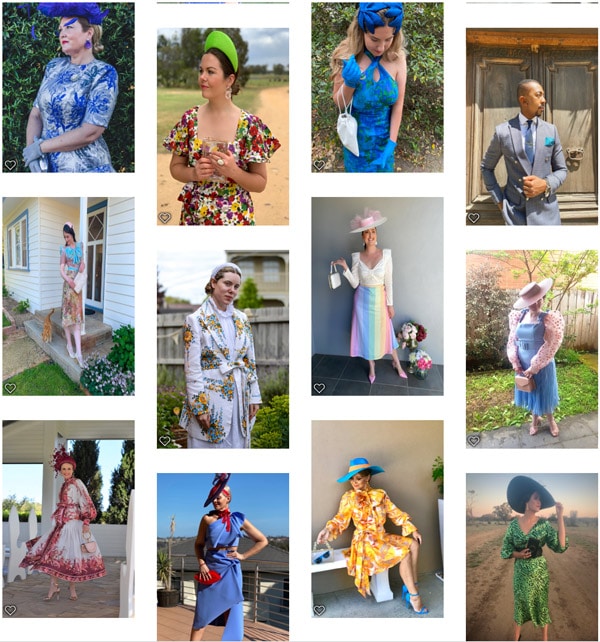 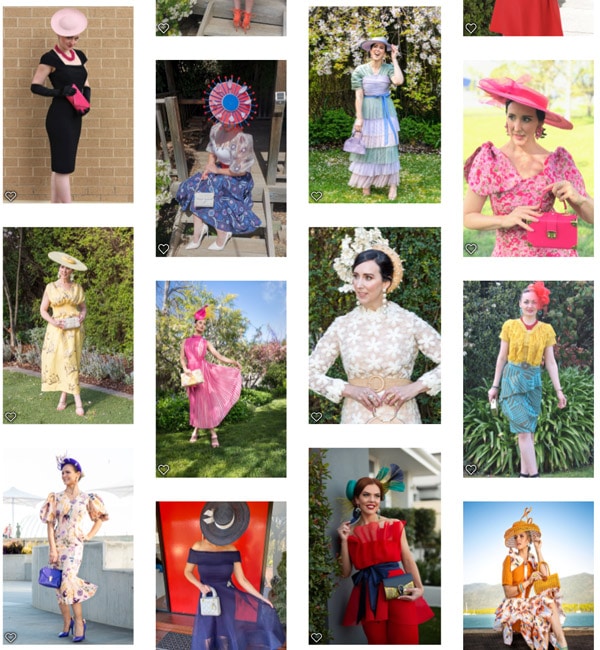 If you would like to see all the entries from each state, they can be found here

Once the entry window had closed, an elected panel of ‘high-profile professionals in the fashion industry’ selected the winners from each state/territory. The winners then competed against each other on Oaks Day to be crowned the National FOTF Winner.

The finalists from each state were…

Shathie in a blue African print dress and millinery, with an on trend wooden bead neck piece. 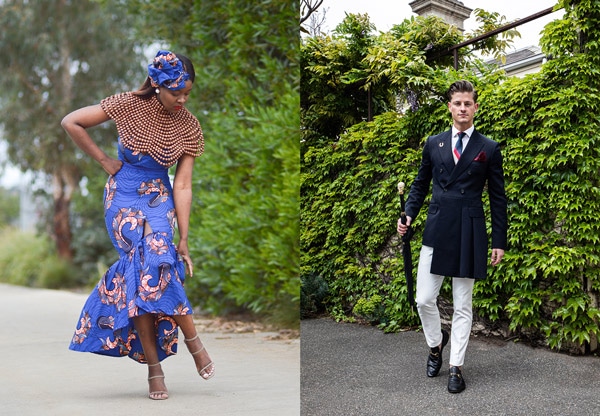 Oliver wore a custom made outfit with Aldos shoes and Myer accessories. 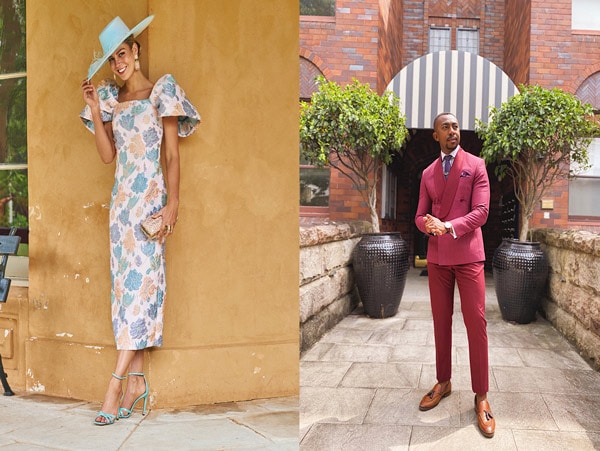 Kerrie wore a blue dress with puffy sleeves and an oversized collar made by her mum, Milva Carucci Designs, paired with Allport Millinery.

Reece wore an outfit from ASOS and Target with Hallenstien Brothers shoes. 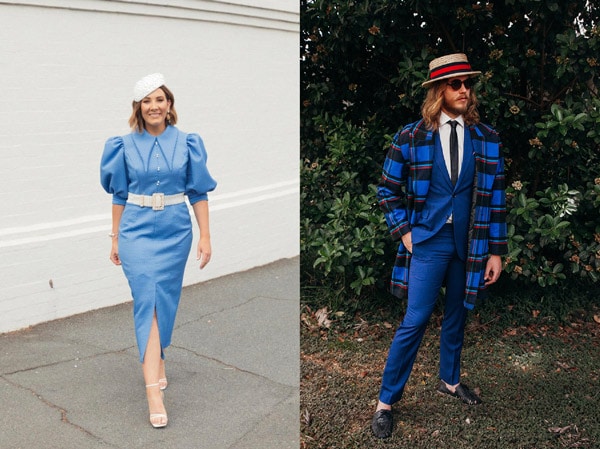 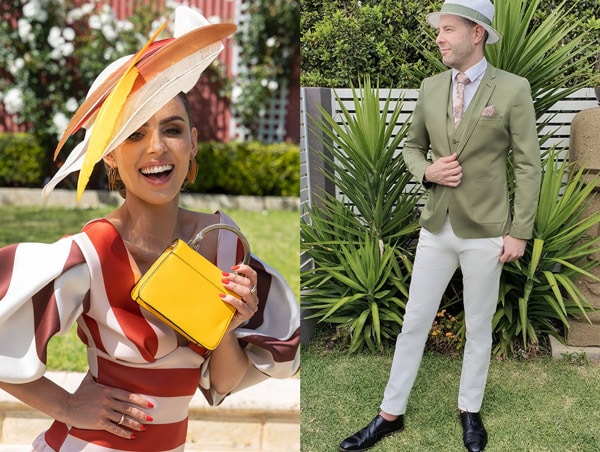 Pete wore a ‘classic British gentleman’s outfit with a twist’ and had the cutest accessory out there, his pooch. 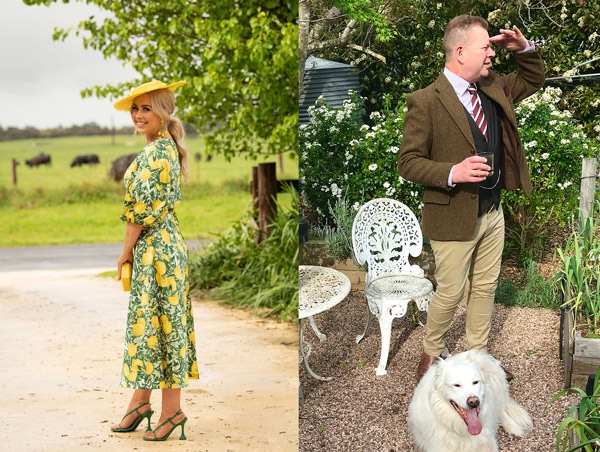 Christine wore a purple linen pantsuit she made herself, topped with a stand out purple wide brim hat by Peacock Millinery.

Sherlon wore a Zara outfit and shoes with a pandemic-appropriate accessory, a clear face shield. 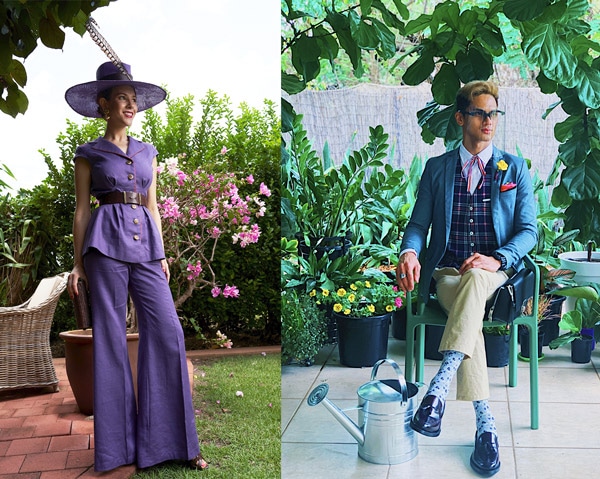 Unfortunately, there were no male entries from Tasmania. 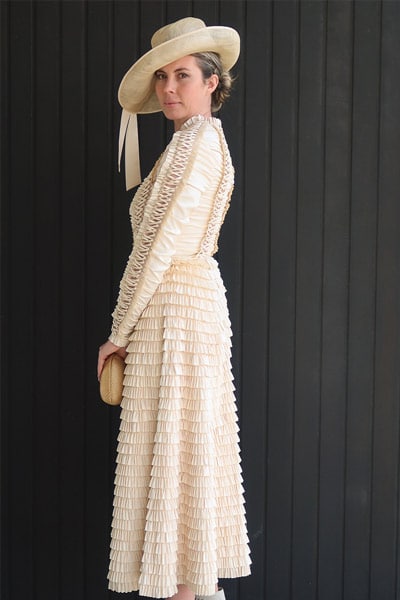 Viviana won in a bright coral custom made dress and millinery paired with blue Billini shoes. Further excitement followed when her husband was named the men’s state finalist. Bradley wore a navy Kenji outfit with Florsheim shoes and a hat from Akubra Down Under. 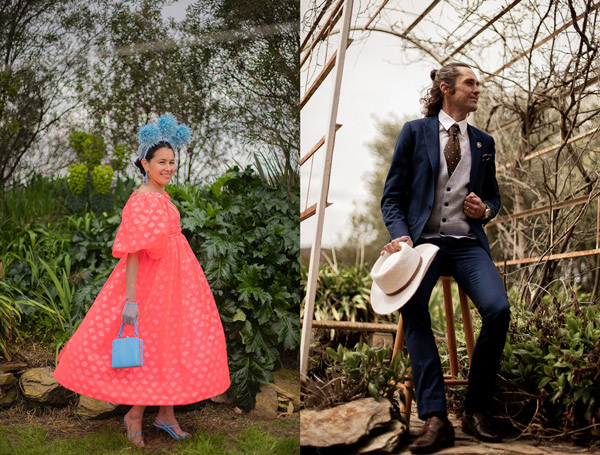 On Oaks Day, the state finalists all called into a ‘Zoom’ meeting which was live streamed on National TV. 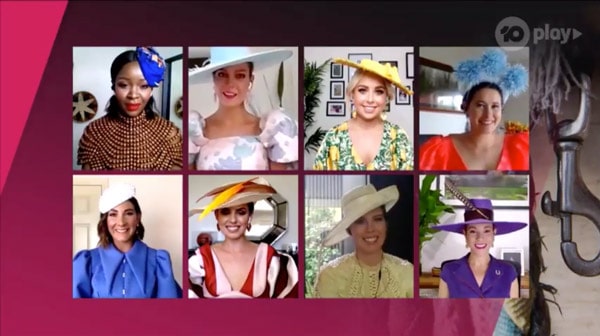 The winners were then announced and, much to my excitement, the National Winner was my friend Christine Spielmann from the NT! Congratulations! 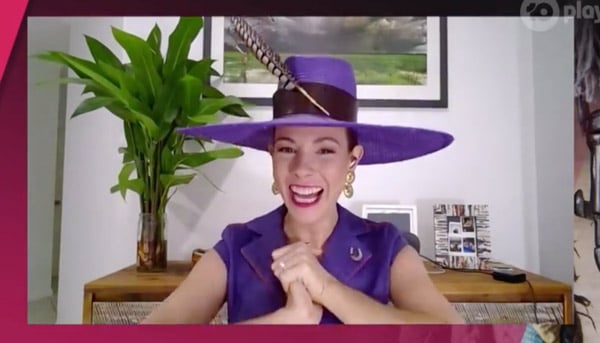 Christine has her own unique fashion flare and isn’t afraid to push the fashion boundaries. She is consistently chic and has an eye for detail which has won her many sashes.

The fashionable entrant designed and made her own purple linen pant suit paired with a leather belt and hat band from her luxury leather accessory brand Requiem Trend. She finished her look with a standout hat from Peacock Millinery.

It was a double sash for the NT, with the men’s representative Sherlon also winning the National Title! 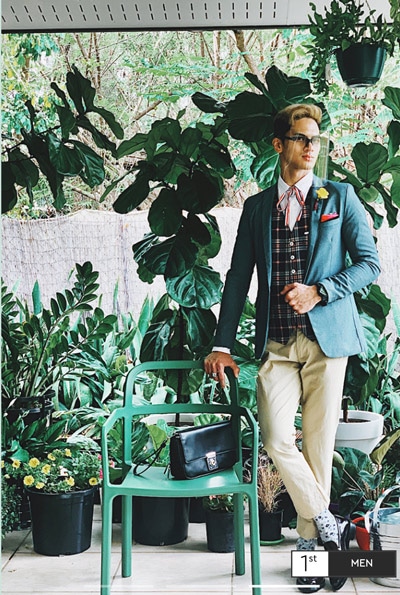 The first and second runner up were respectively…

Annabel Davy from WA and Kelly Odell from NSW. 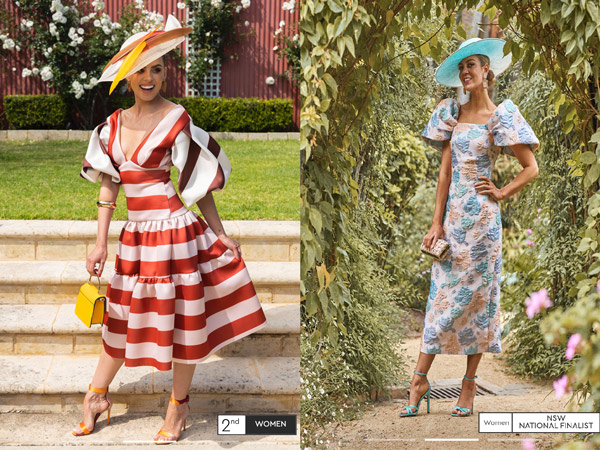 Oliver Kabongo from NSW and David Galea from VIC.