Now, we all know I am a junky and have attended many race day events. Last year I managed to see my first Beach Horse Race and attend some country races, which were so much fun. But an international race day was next on my bucket list (also on my bucket list is Royal Ascot and Dubai World Cup). 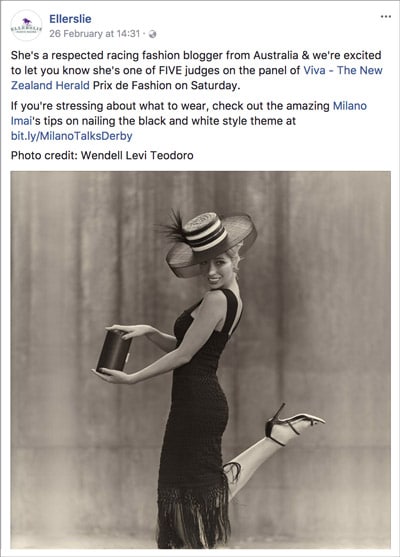 When I was asked to be a part of the judging panel on Derby Day, which is held on the same day as the Viva Prix de Fashion Final, I was absolutely thrilled. This is New Zealand’s biggest FOTF competition, I would compare it to the National Finals in Australia.

Between October and February, eight FOTF competitions are held at the following race courses throughout New Zealand with the winners getting a spot in the prestigious Viva Prix de Fashion competition.

The winner of the Viva Prix de Fashion competition wins the fabulous prize of a trip to Melbourne for the Melbourne Cup Carnival and a fast track to the prelims on Melbourne Cup Day. Lucky Lady.

The eight ladies who had won at qualifying events around New Zealand, going on to compete in the Viva Prix de Fashion Final were Teddy Livingstone, Stephanie Murray, Belinda Green, Claudia Campbell, Elizabeth Charleston, Aleisha Mitchell, Deborah Lambie and Janelle Burnside. The ladies can choose to wear the same outfit they won in or a whole new outfit completely.

Ladies who turn up on the day still have a chance to enter the Viva Prix de Fashion Final. The four winners from the Derby Day Fashions on the Field (held earlier in the day) go through to the final. Most ladies entering the Derby Day competition wear black and white, however, contestants who choose to wear colour are not penalised.

This year there were some seriously fabulous prizes for the Derby Day winners thanks to Hawaiian Airlines. The 4 winners were awarded 100,000 Air miles (equivalent to a return trip to Hawaii!) and 2 night’s accommodation. Am I moving to NZ?? Perhaps. 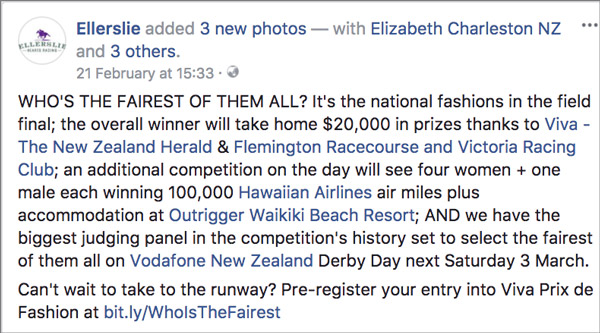 Although just a hop, skip and a jump across the ocean, I’d never been to NZ before and I was super excited, my mind overflowing with ideas on how I was going to spend my (very) few days there. I flew into Auckland on Thursday evening and arrived at midnight. 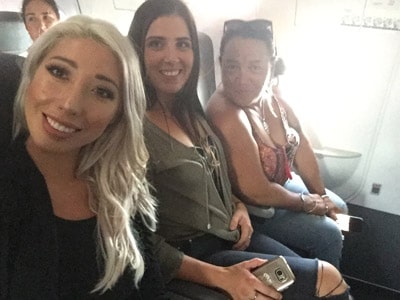 I made two new plane friends who were also visiting New Zealand just for the weekend!

I caught the Super Shuttle from the airport to the beautiful Pullman Hotel, one of the perk’s included in my role as judge (thank you!). I was so happy to see my lovely room with a king size bed…and then I started to feel ill. Overcome with sudden aches and pains, I went to bed right away. The 8 hours that followed were the worst of my life. I was shivering, sweating and aching, trying to get some sleep. Then I was up worrying and stressing over how I was going to get up in the morning and function as a normal person. 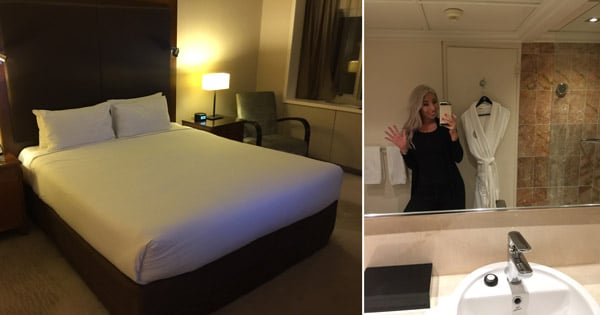 The bed definitely did not look like that after I spent 8 hours rolling around in it like a worm in pain.

The up side to feeling so rotten was that I didn’t actually have any ‘have-to’s’ the next day and was able to sleep till about 3pm on Friday.  The downside was that I couldn’t catch the ferry over to Waiheke Island and visit the wineries (apparently this is the thing to do in Auckland). I was super bummed out about this turn of events, as I have recently discovered that I LOVE wine. LOVE it! 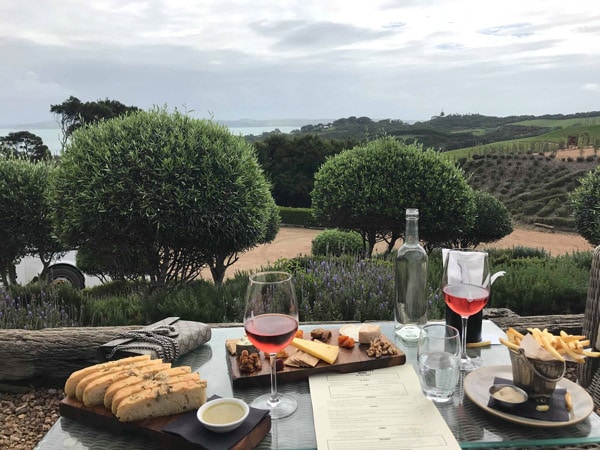 Crystal (Myer National FOTF Winner and also flown over to be part of the judging panel) made the day trip over to Waiheke Island to the Mudbrick Winery and absolutely loved it. It is one of the most popular wineries due to its gorgeous view of the sea and the rolling vineyards.

By the late afternoon (and a whole lot of Panadol) I was feeling much better. I attended the judges’ dinner organised by the marketing team ladies (Olivia, Laura and Rose) at Ellerslie Race Club. And, just have to add these ladies are so super lovely!

On the judging panel was: 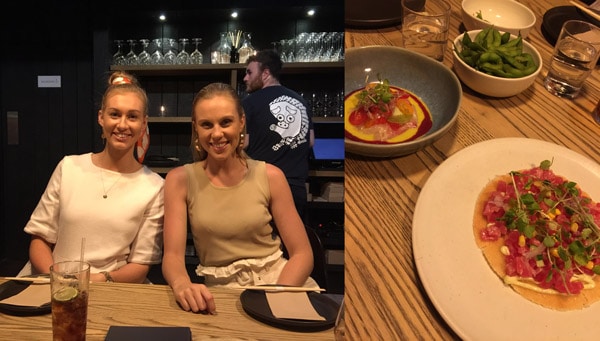 It was great to meet Christie, the VRC representative who came over with Crystal.

We had a delicious Japanese dinner at Azabu in Ponsonby (a popular area of Auckland) and got to know each other a little before the event the next day.

Getting Ready with my Hair and Makeup

It was quite a nice feeling waking up at a reasonable hour as we weren’t required at the track until 1:15pm.

At 8:30am, I half did my makeup (I like to do my eye make-up first, and leave my foundation till I’m about to leave the house so it lasts longer) then walked down the street 10 minutes to Dry&Tea, the hair salon I had booked in at.

It was a very cute little salon. I showed my hair stylist my millinery and some photos of what I liked (thank you hair blog) and  she did this up style for me. 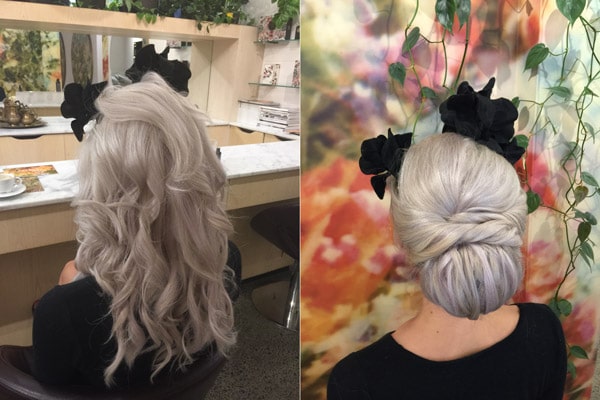 I absolutely love this felt flower millinery by Amy at Pink Lane Hats. I just think it’s so pretty and feminine. It’s super light and comfortable to wear too without being too over the top- which is handy when you’re trying to lean in and whisper to the other judges.

I walked back to the hotel, finished my makeup and got changed. I was so excited to wear my stunning cream tulle dress by Andrew Semple. It definitely made me feel like a princess for the day. 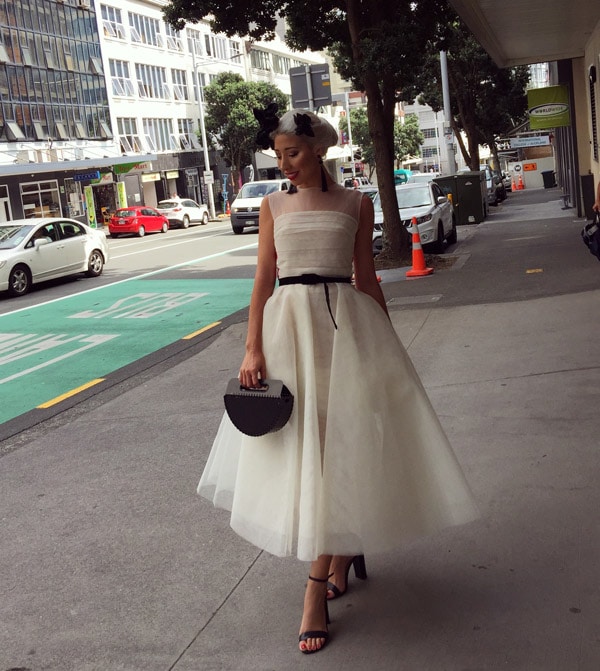 My bag obsession is @requiemtrend :D I love this bag particularly because it actually fits everything I need in it, including my IPhone Plus, paperwork, battery pack and makeup.

The Fashion Marquee & Preparing for the Day’s Proceedings

I arrived at the track and was totally impressed at how beautiful the fashion marquee was. There was a cocktail bar, some tables, a well-designed FOTF stage and judges seating. It was one of the nicest settings I’ve seen so far, a job very well done by the Ellerslie Marketing ladies! 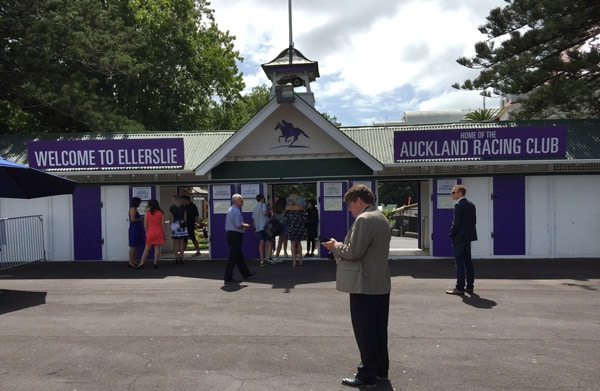 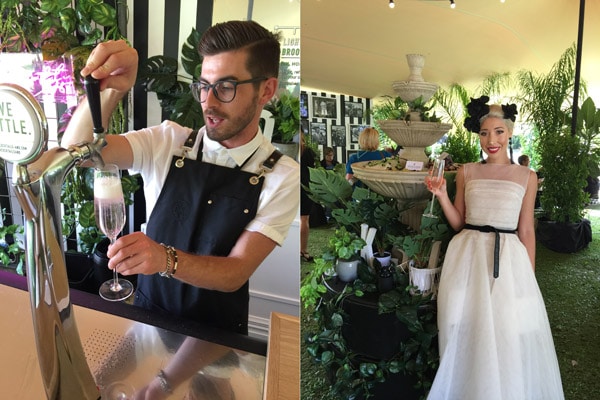 Despite the rainy forecast, it turned out to be a nice, sunny day. I took some time to meet some familiar faces from the Field Fashion Community Facebook Group. It’s so nice to put faces to names you’ve been chatting with online!

All the judges were then swept off to a private room to discuss the day’s proceedings and so we could ask any questions. 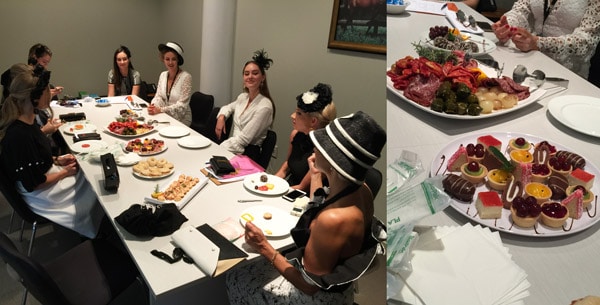 The best part about being a judge is all the snacks.

I just want to say, that this was such a well-run FOTF event. Everything was planned out carefully and ran smoothly. There was lots of communication, and time for us in between heats to deliberate and discuss.

Racing fashion in New Zealand is very similar to Australia and I can’t really say I saw any obvious fashion differences.

The quality of entrants was high- lots of stunning outfits. And I love how much effort everyone went to with their outfits. I’m a big DIY junkie and I loved hearing all the little details everyone went to, like painting their belts with nail polish, hand sewing on hundreds of flowers to their skirt, and even making their own whole garments, or millinery. Awesome job ladies!

Key Trends that I noticed at this Year’s Competition

Trending at this year’s carnival was the midi length hemline (again), as seen on all the stylish ladies below. It’s a favourite in racing fashion because it looks so classy, however, I think hemlines are starting to creep up a little higher back in Aus. There was a mix of full skirts and pencil skirts. 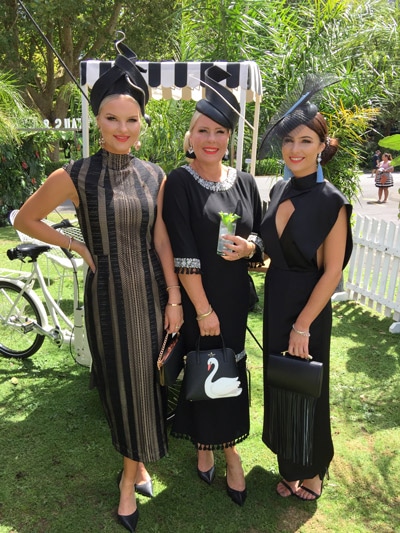 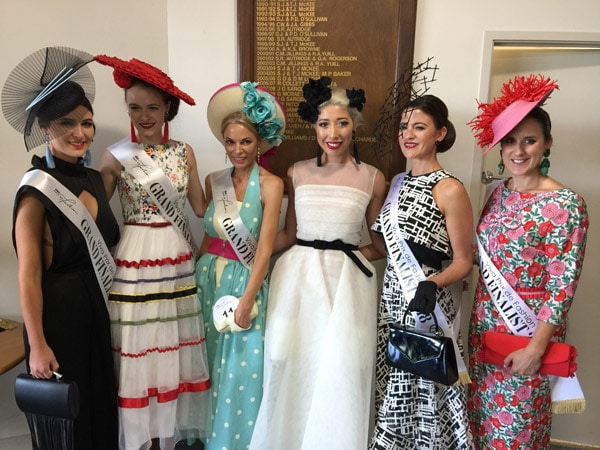 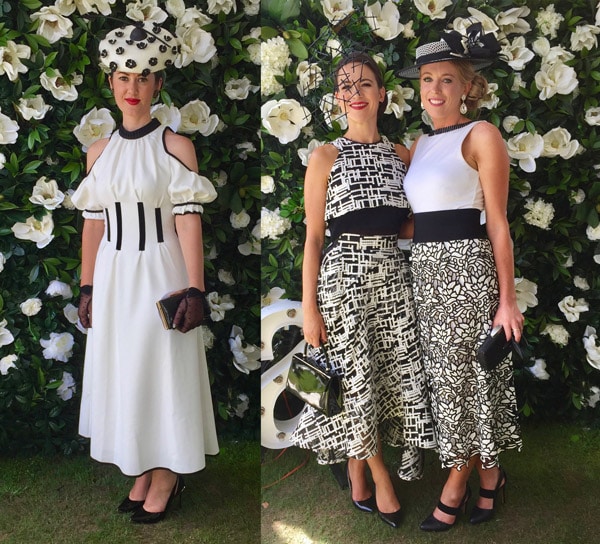 I was super excited to see quite a few pants on the catwalk, especially Aleisha, a grand finalist’s ensemble which featured a tulle top, pants and a magnificent statement percher.

Hand held and ring clutches were popular. I didn’t see a lot in terms of stand out accessories.