The first major race day of the year is Magic Millions on the sunny Gold Coast. There aren’t many FOTF events there, so the local ladies look forward to this day. Many others fly in from interstate for the event too, adding to the glamour.

It’s always expected to be a very hot day, so you have to plan your outfit accordingly, or risk ruining it with sweat patches. Eek!! Most people complain about the prospect of a cloudy, windy day with the threat of rain, but for Magic Millions this year, we definitely needed some clouds and grey skies to combat the heat.

In this post, I’ll share the process of how I came up with my outfit and then we’ll have a look at some of the gorgeous outfits from the 2020 Pacific Fair Fashions on the Field. 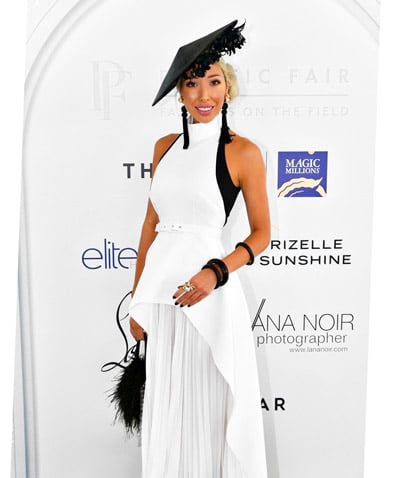 Spring Carnival is an expensive week and I often find myself still paying off outfit debt in the new year. So, when it comes time for Magic Millions, I usually opt to reuse something from my wardrobe and changing it up with some new accessories or millinery.

This year was no different and a couple of days before the event I raided my wardrobe searching for something suitable. Believe it or not, I really don’t own that many race dresses- quality over quantity, right? Anyway, my first two picks were my pink pleated dress or the leopard print dress I wore on Derby Day. 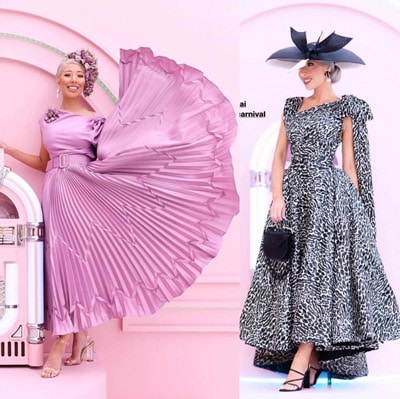 I had seen a black Coolie hat by Stephanie Spencer listed on Millinery Market. I loved it and hired it so once it arrived I was able to try on the dresses to see which worked best. 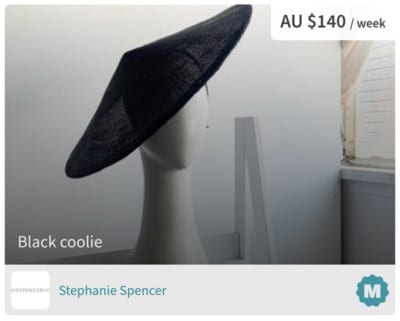 I liked the look of the pink dress with the new black hat. However, my concern was that I had worn that dress two times in the last 2 months and wanted some new photos for my Instagram. Wendell, genius photographer extraordinaire, was going to be there and I didn’t want to miss an opportunity to be snapped in something fresh!

I considered the leopard, but I felt it just didn’t have the right feel for Magic Millions. It’s quite heavy, with layers of fabric, so it would be HOT. And if I was going to wear it, I would have to remove the black lining to reveal the original yellow lining… it all seemed like too much work. 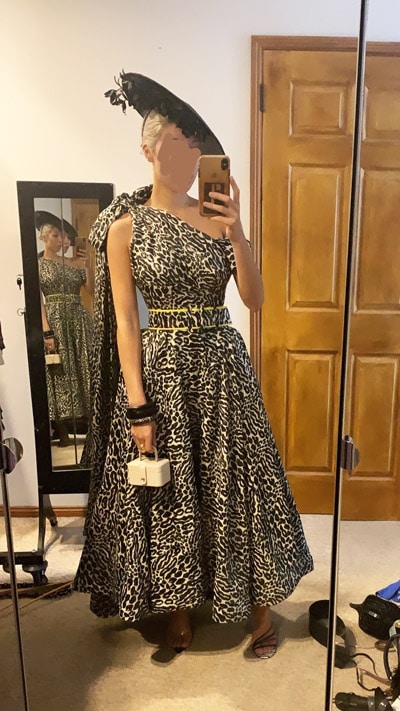 I scoured my wardrobe one more time and came across a white Alex Perry dress. I tried it on, it was nice… but I wasn’t sold on it either. 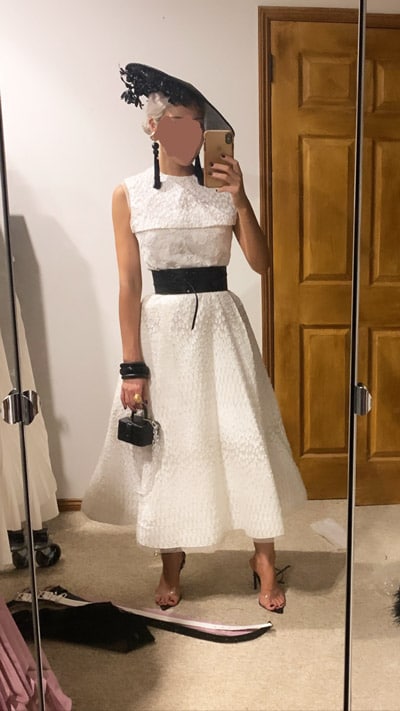 Then I remembered a white Solace London dress, which I had bought and altered last year. I have always loved this dress, the only problem is that the sides are cut away, showing a whole lotta side boob! And even though it is the Gold Coast, side boob is not very race appropriate. 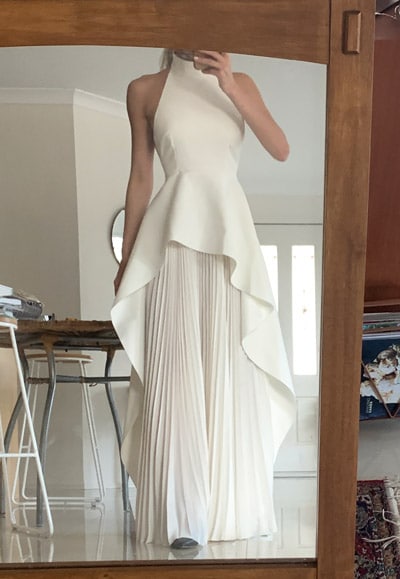 This dress was originally full length. I really didn’t want to cut the length as it was so beautiful, but a full-length white dress at the races? On the muddy lawns? Pass. 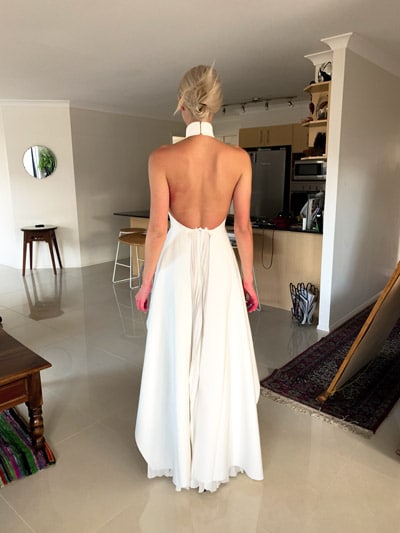 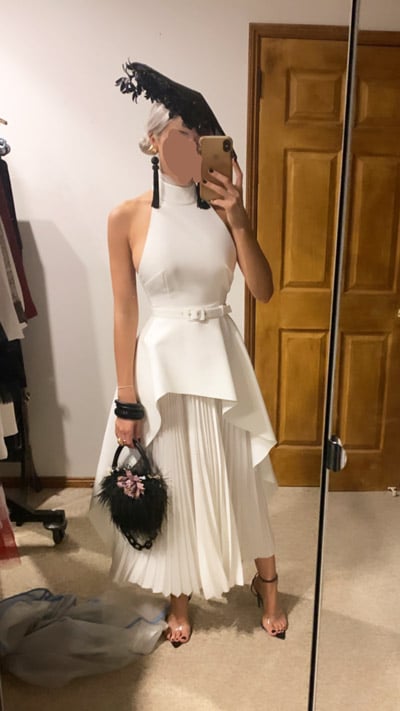 If I had more time, I could have sewn something onto the sides to make it more conservative, but as usual, I had left it last minute.

It was now 11pm the night before the race day, I was tired and a bit over it, so I decided to go to bed. Maybe morning would bring some inspiration.

I woke up super early the next day to get ready and make the final outfit decision.

I tried on the pink outfit and Solace London dress multiple times. Still couldn’t make a decision. This year I had Tina and Kiah from Strands hairdresser come to my house to do up-styles. There were 6 friends coming over to my house to have their hair done. Each time someone new arrived I tried on both dresses to get varied opinions. White was the favourite… but the side boob was not.

Defeated, I decided to go with the pink. Insert eye roll emoji.

But wait! I remembered a black Kookai stretch top I had….digging it out, I tried it on under the dress. Amazingly, it was the perfect shape to complement the dress and worked well with the styling. 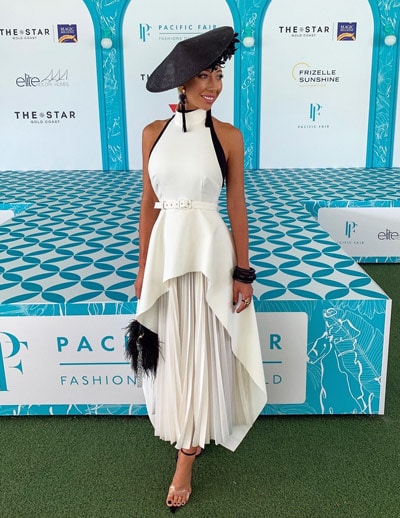 I completed my look with a feather bag from Bardot, to which I attached a clear acrylic strap to match the acrylic feature in my shoes, from Fashionova. On a side note here, I’d just like to say these were the MOST uncomfortable shoes ever. It felt like my feet were broken and like I wanted to take them off, mid event, on stage, I was in agony!

I spray painted some bangles black and wore a diamante gold bee brooch as a ring, by securing it to my finger with a hair band. I wore some chunky gold and black tassel earrings from Lovisa, which I got on sale the day before-woo hoo!

Update from the Track

The track was a bustling, beautiful sea of colour. Many familiar local faces wandered around, as well as some friends from Melbourne, Sydney and FNQ. 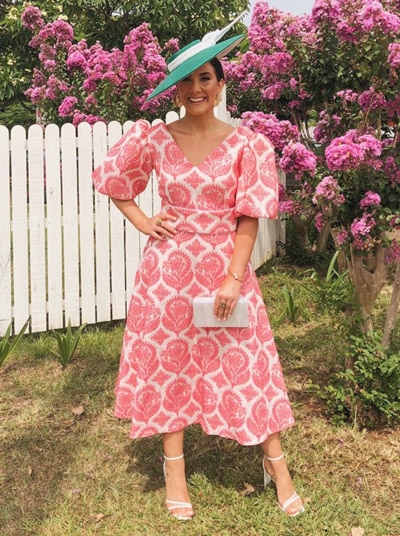 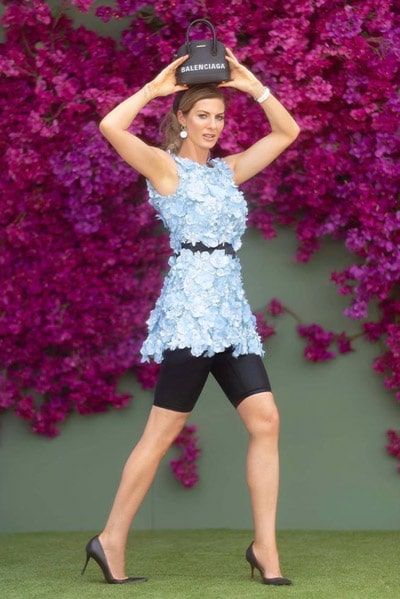 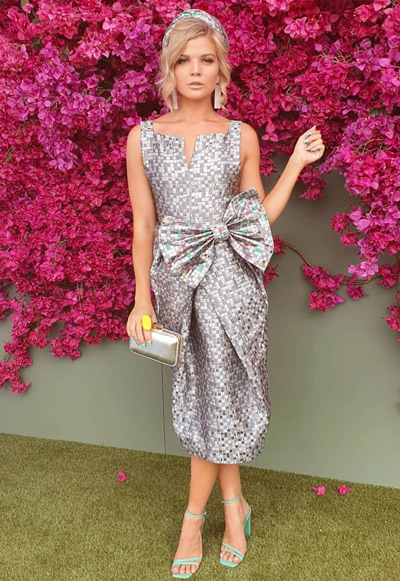 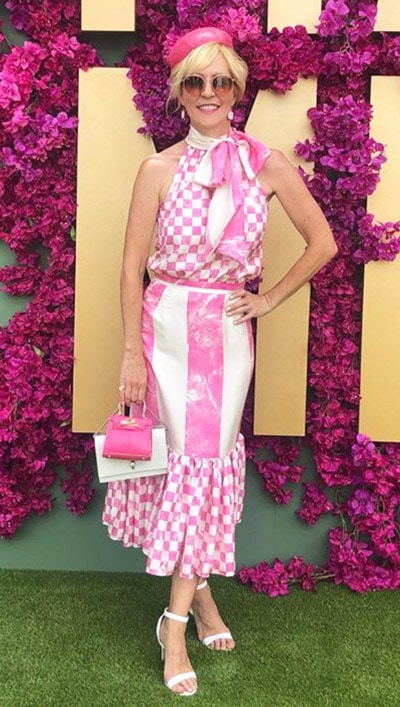 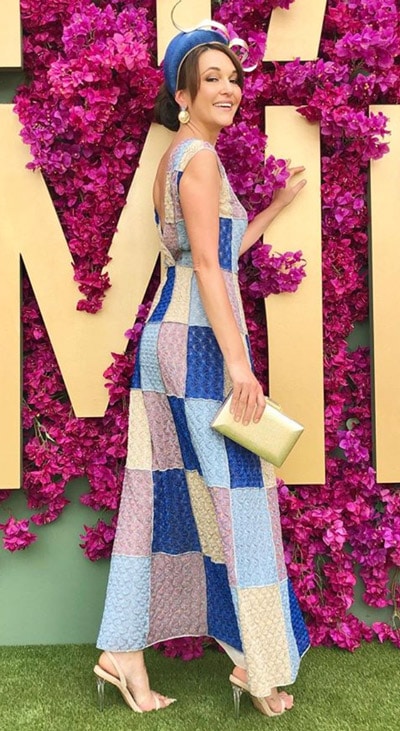 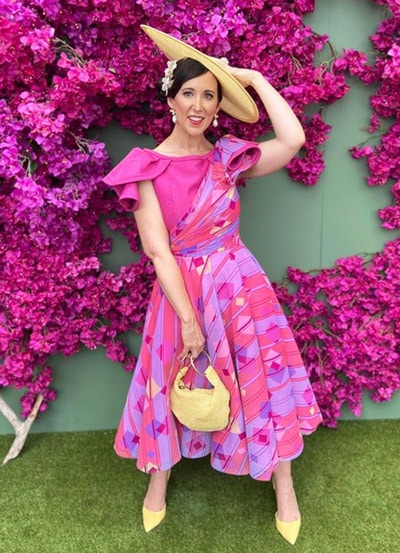 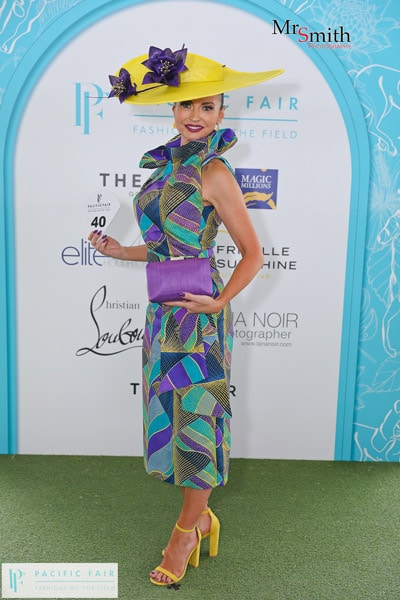 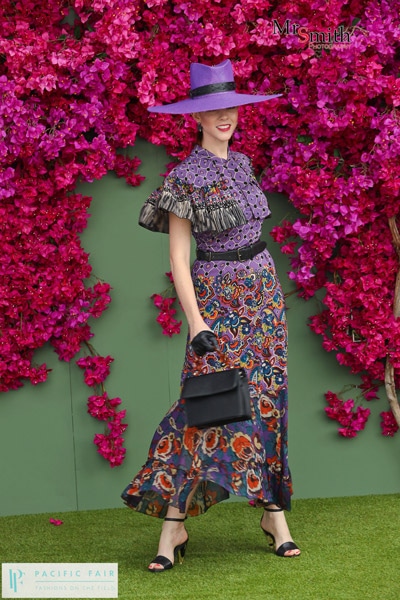 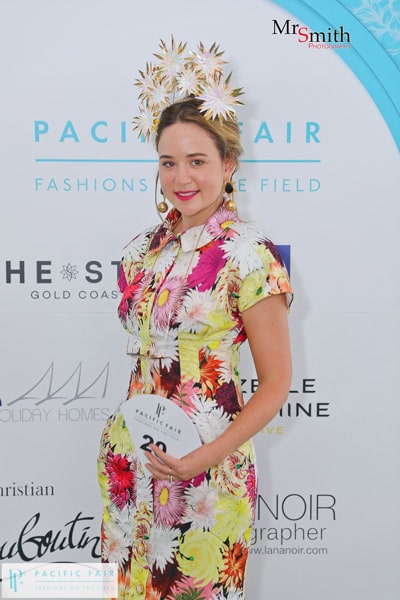 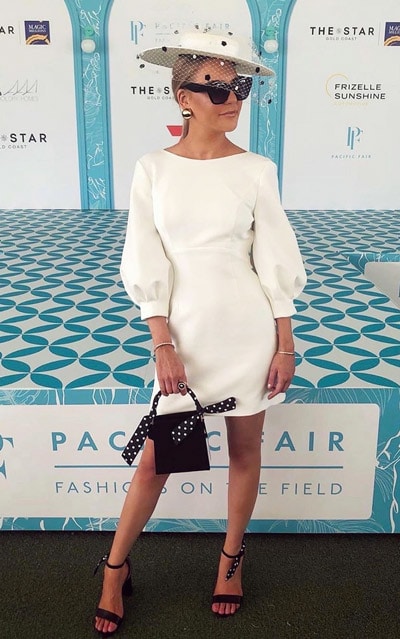 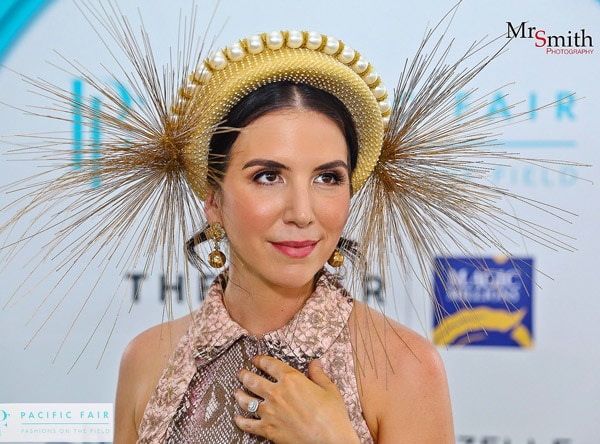 There were around 30 entrants in the women’s category. Magic Millions has also made the move to incorporate a photo competition, where the top 10 are selected via photos and then they are able to showcase their style on the catwalk in front of the judges. 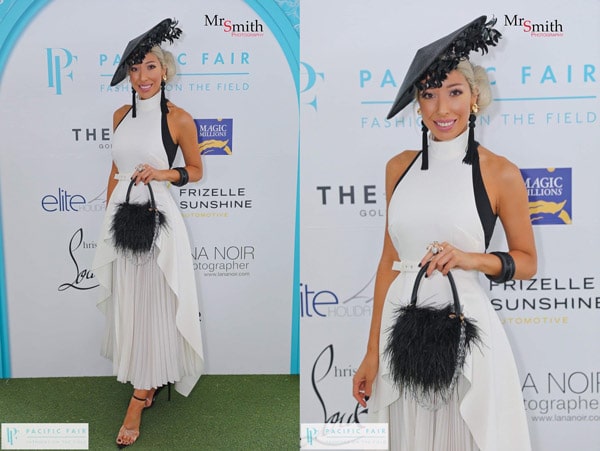 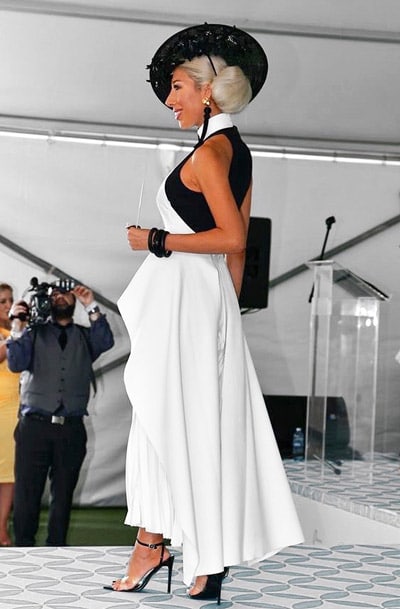 However, upon arriving and registering at the FOTF desk, we did have two photos taken in front of the entry wall, but we also all lined up in heats, just like a regular FOTF. On stage we did a twirl in front of two judges who picked the top ten finalists.