The Story Behind my Winning Outfit | Stradbroke Day 2018

Stradbroke Day is my favourite day of the Brisbane Racing Club Winter Carnival.

This year was no different, but I was looking forward to it even more than usual because I had missed the other 3 days of Fashions on the Field events in the carnival. I really needed a day of frocking up and catching up with all my race friends. And for the first time ever I had marquee tickets to the bird cage!!

But first, an embarrassing flash back.

I will get around to telling you my ‘real’ story, but Facebook was kind enough to remind me of this memory, which can’t be overlooked. It was the first Stradbroke Day I ever attended, back in 2013.

Somehow I managed to miss the ‘black, white and a touch of red’ memo and turned up in THIS! I walked on stage. And off again. Didn’t make the heat. This outfit makes me cringe a little bit. Please Facebook, don’t remind me of this again. 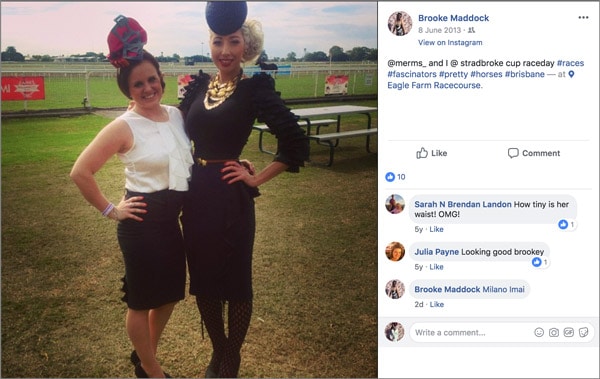 My outfit is black, navy, brown and gold. Look at that terrible messy bun too. Oh my.

I actually started off with a hat, hired from Millinery Market. Spying Carmen’s leather disc hat by Sharon Wilson, I fell in love and then had to revolve my entire outfit around the hat. 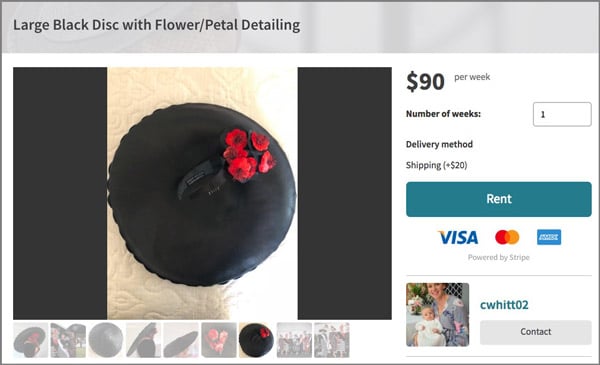 The reason I missed the 3 previous FOTF events was due to a super-fun, but expensive holiday to Japan! Having spent all my money on ramen and snacks, I planned to save some money by repeating an outfit– I’m a total repeat offender!

I considered the black and white striped outfit I wore to Derby Day, paired with my new hired hat. 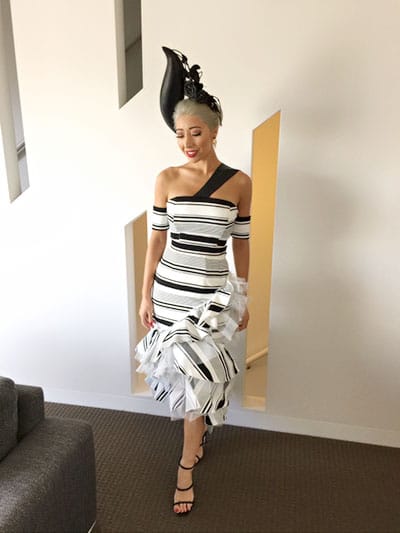 Then I thought about my tulle dress, with a top over the top, to make it more winter-y. 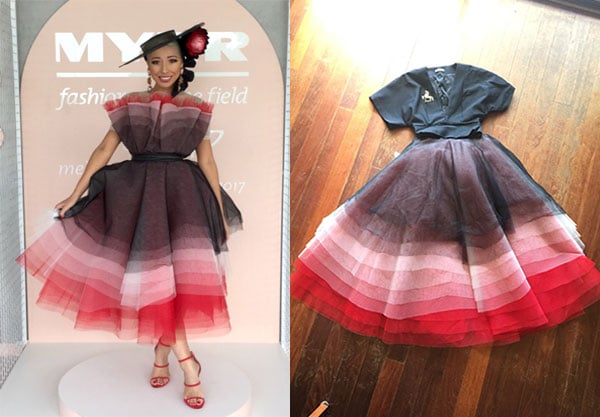 My black and white stripe outfit was an off the shoulder style and I would need to have my shoulders covered for winter. I love the look of a blouse under a strapless bodice so set out looking for the perfect white top to go underneath my outfit.

The Search for the Perfect White Top

I found this stunning Harvey the Label shirt online, but they had sold out of my size and only had a top 3 sizes too big available. 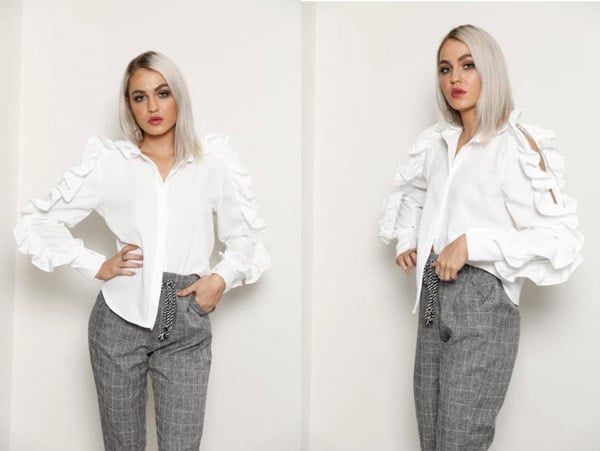 Loving the top, I took a chance and emailed, asking if anywhere had one available in my size. The girls were super helpful and actually did find one. Meant to be!

It arrived a few days later. I tried it on with my stripe outfit… fail. Miserable fail. The sleeves had too much volume and the whites of the top and dress clashed. It just didn’t work at all. Back to the drawing board with just a week till the event.

Plan B, a dress with a full skirt and a strapless bodice? Did I have one? No. Could I find one at the shops? No.

I went through my wardrobe (yes this happens often) and tried on my black and white floral dress from two years ago, made by Andrew Semple. I just felt the pattern would suit my hat so beautifully. 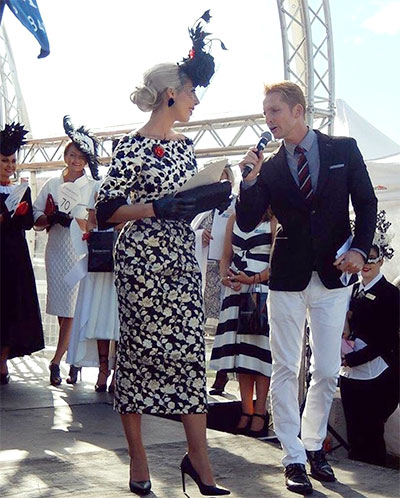 I folded the dress down so it appeared strapless and tried it with my hat. I loved it. Then I tried it with the shirt underneath… more love! 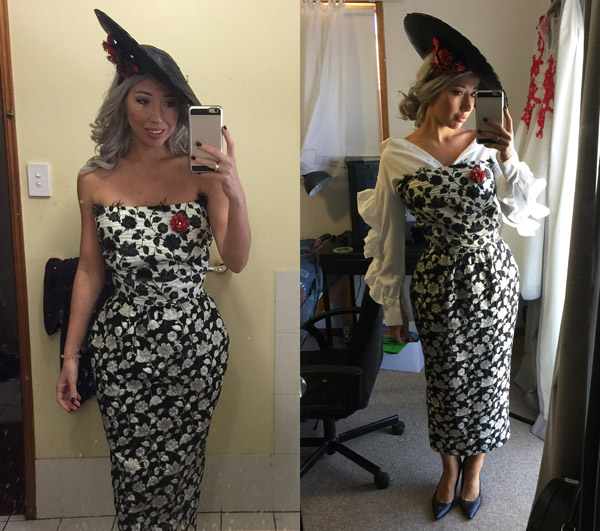 Obviously, I wasn’t going to wear the same dress as two years ago, but Andrew had a whole roll of fabric left over. I knew we didn’t have much time, but thought I’d try my luck anyway. I messaged Andrew…

How fabulous are my 10 second sketches I drew up? I should be an artist haha

To my absolute delight he said he could do it! Gem.

Two days later I went over to pick up my dress and have a final fitting. It was sooooo lovely!! This fabric is my favourite! 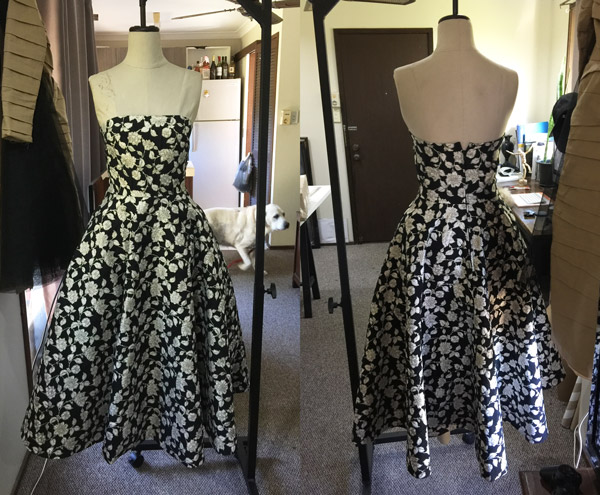 My dog Boofy loves visits to Andrew’s house too. 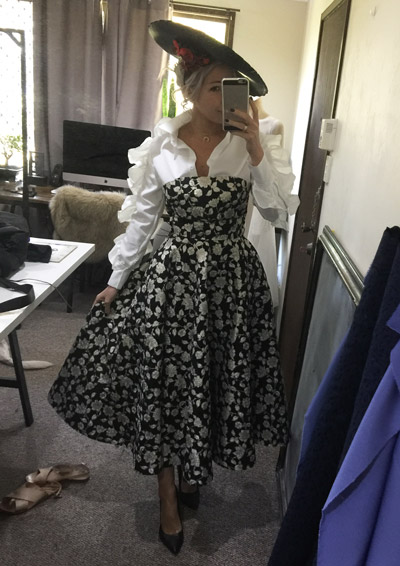 I couldn’t wait to take it home and start accessorising.

In the mean time I had ordered some ostrich feathers online. I have been obsessed with the way ostrich feathers float and move since I saw Philip Treacy’s jelly fish hat for the Valentino couture show. Although my hat was awesome on its own…. I wanted to give it a little extra fancy detail. 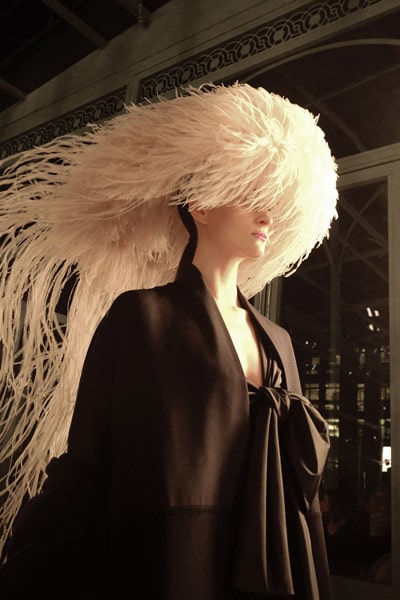 I would give my first born child for this hat. 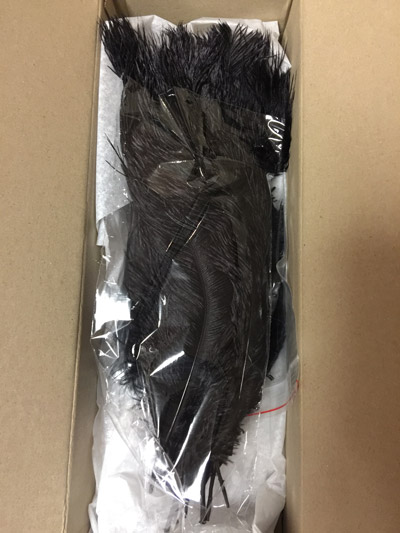 I had googled ostrich feathers and looked into the different ways you can manipulate them as I wanted to create a similar effect on my hat.

I decided the best way was to use some veiling as the base, and then individually strip the feathers into a small bundle, and glue them onto the veiling in a circular shape that would go around the edge of the hat. 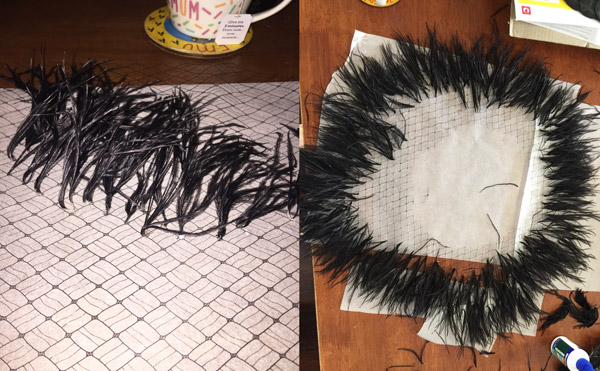 It took quite a few hours. Working with feathers, glue and sticky fingers is not for the faint-hearted!

Eventually I had made a nice ring of feathers- and had used up all my feathers, so had to stop there. I placed it on top of the hat. Voila!

I had purchased some black suede shoes with silver studs all over them and a belt from Kookai. 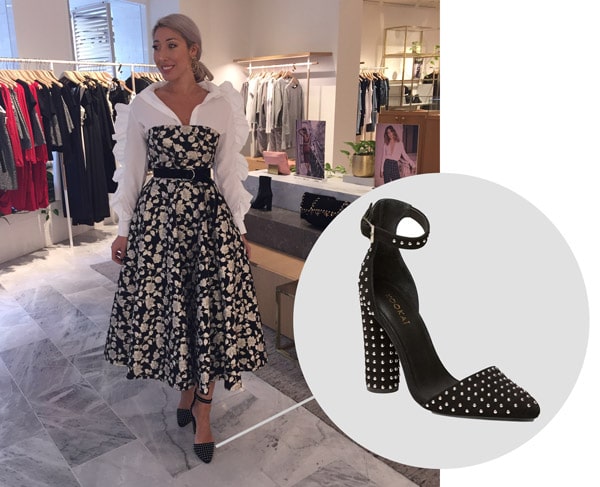 I tried on the complete outfit. It was fab, until I put the hat on.

The combination of the hat, with the feathers, the big ruffle sleeve shirt… made me feel a little bit like a pirate. Something was off and I couldn’t put my finger on it. I started having a crisis. Mind you, by now it was the night before the event. This is where having a race mum comes in handy! 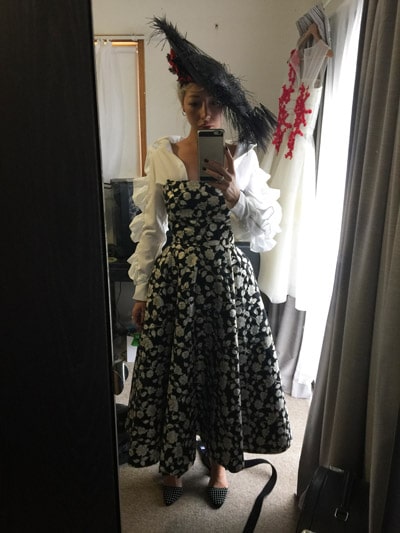 Race Mum to the Rescue

I messaged my friend Brooke. Whenever I’m having outfit doubts, she will come over and help me work out what’s not working.

It was 11pm when she arrived. And agreed, too piratey.

After trying on some different belts and ditching the feathers on my hat, I pulled out a red pair of suede shoes I purchased from Big W last year for $10.

They worked so well with my outfit! So well that I put the feather trim back on my hat and the pirate vibes were magically gone, replaced by a more Spanish feel! I once again loved my outfit. 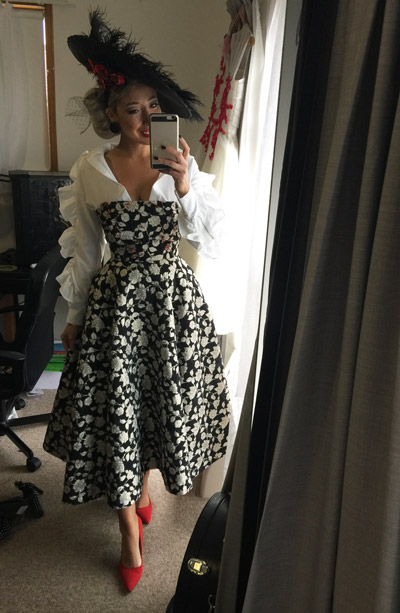 That night was a long ordeal. I then had to work out how to stick the feather trim onto my hat, without using any permanent fixtures or making marks on the hat. It was a hire piece from Millinery Market!

After racking my brain, I tied the sides down with some mesh that also doubled as a feature tie! Genius! (if I do say so myself) haha 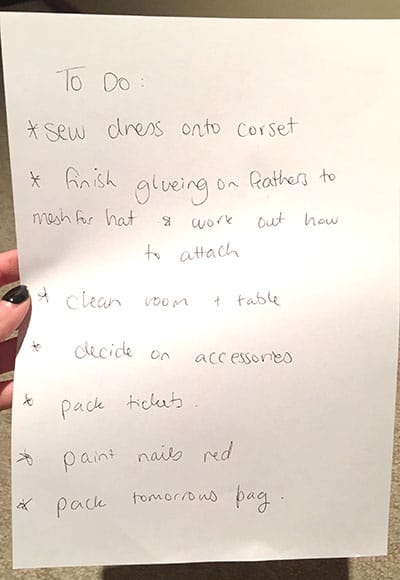 With the limited time Andrew had to make my dress, it meant he didn’t have time to add boning. Luckily, I have a little trick for that. I have a few boned corsets at home from my time working at Kitten D’Amour. I sewed one underneath the strapless dress to hold it up. 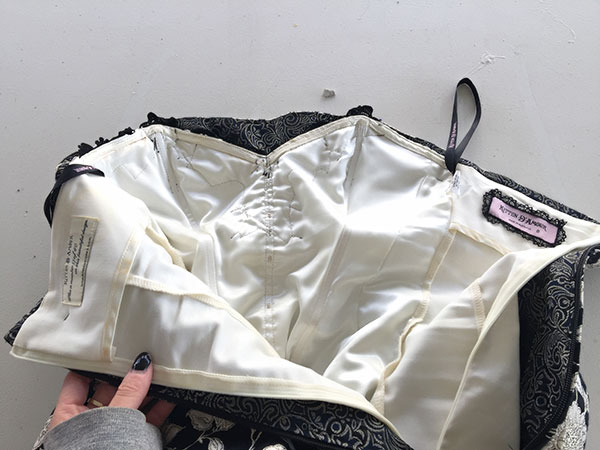 With the hat and accessories sorted, I felt the need to add a few red beads to the bodice of my dress. I beaded for a few hours and, at 3 am, crawled into bed. I had to be up 3 hours later.

My go-to hair stylist, Kirsten, did me a lovely up-style and worked the tulle ties into my bun.

I was dressed and ready to go by 9am. My friend Emma came along to enjoy the marquee with me and I needed someone to live stream the event for me as I was entering FOTF I wouldn’t be able to film and do Instagram lives at the same time. 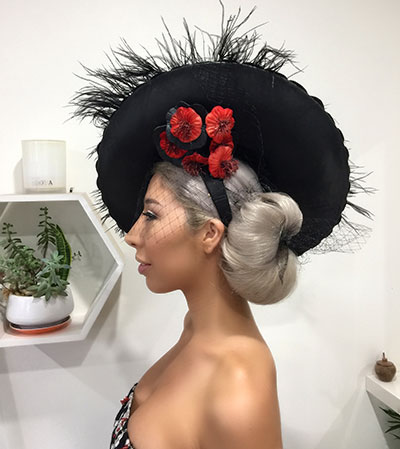 God-bless-Mum drove us up there. I’m a terrible driver to begin with. Throw in a huge hat, limited range of motion and some marquee tickets to indulge in some sparkling drinks and, well…. thanks Mum. 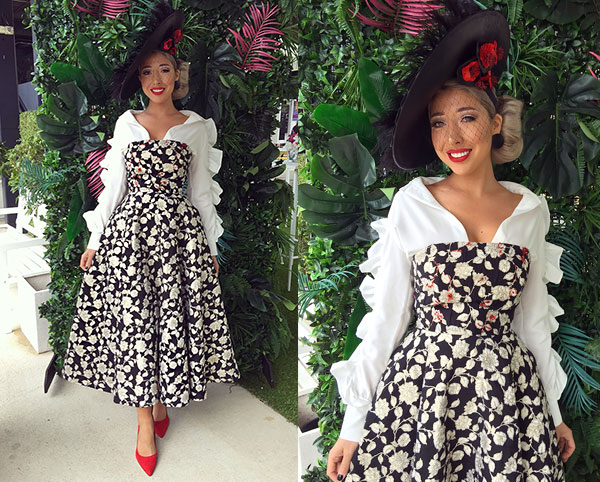 There were so many stunning outfits!! Stradbroke Day is where everyone really brings their A-game and I had so many favourites! These are just a few I managed to snap on my phone before the competition started…